With just another couple of days left during which the first three books in my Daughters of Sin series is discounted to only 99c, I thought I’d post my favourite review of 2018 here. It’s on Goodreads and I felt it epitomised the series as a whole.

You see, while Daughters of Sin is categorised as a Regency romance, it really crosses a lot of genres. There’s espionage, suspense, sizzling passion, characters behaving badly (including the heroine, sometimes) and, as many reviewers point out, a page-turning race to an unexpected ending. 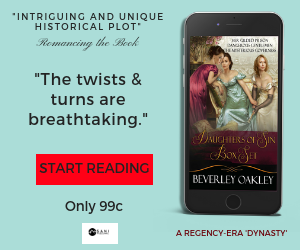 So, here it is – the review that made my day!

And, as I mentioned, the first three books in the single box set have been hugely discounted to 99c so grab it while it’s still a bargain! You can get it here!

Daughters of Sin, by Beverley Oakley

It is, without doubt, the most crooked, twisted, and complex Regency Series I have ever read. By the end of the story virtually no one has escaped from not merely downright scandal, but near-criminal actions.

The story begins with Humphrey seeking a legitimate heir, whom he finds in Stephen Cranborne, a distant cousin. Stephen is sort of expected to court the eldest daughter Araminta, but instead falls for her mother, Lady Sybil Partington, who has spent twenty years in a loveless marriage. Already you can see where this is going.

Araminta, however is a piece of work. She is shrewd, cunning, highly ambitious and planning to take over the estate if she can manage it–and she definitely thinks she can. Araminta is so clever she can always manage to snatch defeat from the jaws of victory, and forever manages to turn every good thing into something twisted and wrong, until the very end of the series where she comes up smelling like roses. You have to read it to believe it!

Her sister Hetty plays second fiddle throughout, and has to fight for every little bit of recognition. She does manage to snare Araminta’s beloved, however–but it only adds to the complexities.

But it’s the two illegitimate girls who drive the action. Both escape the village in which they were scorned as bastards, even as their mother is having another illegitimate child by Sir Humphrey. Kitty becomes Kitty La Bijou, the actress (horrors) and the toast of London. Lissa becomes a governess with a talent for sketching that leads to blackmail, and that’s where the villain enters the story. Lord Debenham is a cruel scoundrel who is not above blackmailing and even killing his rivals, and when he and Araminta become entangled you know the worst is going to happen.

Between blackmail plots, treasonous cabals, and illegitimate children born to one and all, the story becomes a seething mess of contradictory actions that never ceases for a minute. By the end of this tale of Regency madness perhaps the only person who emerges with an unsullied reputation is Ralph Tunley, Lord Debenham’s secretary, (a secret agent dedicated to finding evidence of Debenham’s wrong doing) who somehow manages to keep his head above the boiling water.

I must say I rushed from book to book in the series, fascinated over what was going to happen next. I was never disappointed. Beverley Oakley knows how to keep her readers reading, and the fact that I bought the series as a bundle at least kept me happy while I ran through it.

Each of these books deserves a review of its own, but I hope this outline will serve for all. If you buy the boxed set, which is quite reasonably priced, you will be set for hours of chair-edge reading. A great buy and a great read!”

So inspired have I been by this summary by a reader who liked my series that I’ve raced ahead into writing Book 6 which starts a couple of months after Book 5 ends.