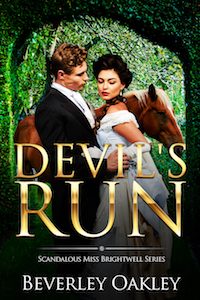 If you’ve read any of the Scandalous Miss Brightwell series, you may be about to start on Book 3, Devil’s Run, or have just finished it.

Poor Eliza Montrose is torn between two great loves of her life. T0 achieve one of them – which is to be close to her long-lost love child, Jack – she’s had to agree to a terrible bargain which is that she’ll marry awful, odious George Bramley.

Worse than that, though, is that she’s fallen in love with kind, romantic Mr Rufus Patmore.

No one at Quamby House, where she’s a guest and where she’ll soon live after she marries George – can understand her insistence on honoring her nuptials. Least of all the parlour maid, Sally Cooper, as you’ll read from her letter, below.

This is another one of them letters where you’ll have to choose what’s only good and proper to report to the little ‘uns, cos I can tell you that the goings-on at Quamby House between Her Grace and an actor fellow called Mr Ambrose ain’t fit for their innocent ears – notwithstandin’ that I won’t ever criticize my beautiful lady duchess since she gived me her fine spotted muslin from only last season and a tippet wot she said reminded her too tragically of her last lover.

So, here’s the gossip and I can’t see a happy endin’ in sight for either the new house guest Miss Montrose or my beautiful duchess—who must know she’ll burn in hell for runnin’ from her duties attendin’ to the earl’s gouty foot to makin’ secret plans with her new actor fellow, Mr Ambrose in his bedchamber. (Not but that the earl don’t seem to care what she does as long as she’s there to play cribbage when he wants and to lean on her when they go out and about.)

Well! Last week, along came beautiful Miss Montrose for a five-day visit and you could have knocked me over with a feather when I were told that His Grace, the Earl of Quamby’s horrible nephew Mr George Bramley were going to marry ‘er. Me beautiful duchess didn’t like it either, for that’s when she said she were goin’ to get Mr Ambrose to do some sly work and see if Miss Montrose had a sweetheart lurkin’ in the shadows for Miss Montrose—sure as God made little apples—couldn’t want to marry Mr Bramley.

If you ask me, I think Miss Montrose is madly in love with Mr Bramley’s friend, Mr Patmore, a very kind and charming gentleman wot came here to buy a horse and were ever so generous, givin’ me two shillings for stoking up his fire ‘just as he likes it’, he told me. Ah, but I can see why Miss Montrose would be mad for him, wot with his handsome brown curls and twinking grey eyes, an’ I can’t understand why she refused him. Yes! She refused him for I saw him ask her when I were taking the stable boy his dinner. She wouldn’t let him go down on one knee and be all romantic, and then later I heard her cryin’ in her bedroom.

It’s a mystery and it don’t make sense she’d want to go ahead and marry Mr Bramley when her heart is breaking for Mr Patmore who wants to marry her.

But what do I know of love? Just that I’m more than determined on bein’ a good girl and not takin’ as my example my beautiful duchess who I overheard Mr Bramley say would turn black and pockmarked with her corruptness—though the whisper is ‘e once ‘ad a passionate affair with her, though he were, in truth—madly in love with her sister, Miss Fanny Brightwell, who rejected his marriage offer.

Must go and change the bedsheets. There’s more dirty linen in me life than you can shake a stick at; and since there’s nothin’ here you can read to the little ‘uns, just tell ‘em that thanks to Mr Patmore’s generous two shillings, I’ll come home Sunday next with three sugar mice for each of ‘em.

Below are the five books associated with the series – all of which you can find, here.