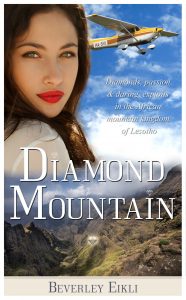 In 1963, the small mountain kingdom of Basutoland (now Lesotho) was a British protectorate three years from Independence. Diamonds had been discovered in 1957 at Letseng-la-Terai (now the Letseng Diamond Mine), but its inaccessibility at 10,000ft made it unviable as a commercial venture and in 1959 it was declared a government digging. Optimistic and enterprising local Basuto registered small leases, battled up a single mule track and used picks and shovels through baking heat in summer and thick winter snowfalls to discover generally low grade ore. However, some extraordinary finds, such as the 601 carat Lesotho Brown in 1967 and the 478 carat Leseli La Letšeng distinguish the Letseng Diamond Mine for having the highest dollar value per carat of any diamond mine.

If Basutoland’s mineral wealth was not internationally appreciated at the time my novel, Diamond Mountain, is set, its geographical location was. Landlocked by apartheid South Africa, its strategic importance was recognised by world powers such as China, Russia and South Africa, who enticed Basutoland’s fledgling political parties with money and overseas scholarships in the years prior to Britain formally granting Independence on 4 October 1966.

Prior to Independence, Basutoland was divided into ten districts, each administered by a District Commissioner, ultimate authority residing with the Resident Commissioner who was based in the capital, Maseru, which had a population of about 500 Europeans and 5000 Africans.

By contrast, the remote, mountainous region of Mokhotlong, where much of my story is set (and where I was born), consisted of a small African village, a few African public servants, half a dozen European Government employees, a few European traders, and none of Maseru’s amenities such as running water, sewerage and electricity. A ten-bed government hospital employed a doctor and a few nurses.

Mokhotlong’s District Commissioner, Charles Tremain, is a fictional character based on my father only in terms of his position and responsibilities. As the resident representative of the British Government, he had wide administrative authority that included performing the functions of magistrate. The DC worked with, and respected, the traditional chieftainship system, but intervened if there were criminal issues such as medicine murder and other breaches of a criminal nature, including Illegal Diamond Buying (IDB), two key themes in my novel.

Although my father served as Mokhotlong’s District Commissioner in 1963, I have taken liberty with dates and it is emphasised that all characters and day-to-day events are from the author’s imagination and should not be confused with fact.

Any resemblance to persons living or dead is purely coincidental.