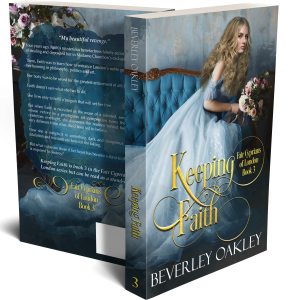 With only 17 days until the release of Keeping Faith, I thought I’d better post an extract.

A blog tour is going to start in a few days and there’ll be prizes and more extracts so do come back if you want to follow along.

First, though, a little bit about the concept. For those who don’t know, Keeping Faith is book 3 in my Fair Cyprians of London series which is set in 1878 in a high class brothel in Soho.

The inspiration came from the first-hand accounts of the prostitutes and ‘underworld’ characters which are published in 19th-century journalist Henry Mayhew’s London’s Underworld.

I was further inspired by pictures of the men and woman of those times. Surely clothing influences the way a person behaves? Think of the gaudy, slatternly costume of the Victorian prostitutes compared with the buttoned-up elegance of the well-off. Wouldn’t each have carried themselves differently, depending on the varying levels of physical freedom allowed when wearing corsets and combinations or clothing that was easy to work in?

“What did you learn last night?”

“A gentleman must always believe he knows best.”

Confident that her answer was pleasing, Faith reached across the table to help herself to a macaroon but a sharp slap across the back of the hand stopped her progress by the silver teapot.

Her smile of feigned contrition was rewarded with a raised eyebrow from Madame Chambon. Not an invitation to partake of a macaroon, unfortunately. The table laden with eclairs and petit fours in Madame’s private sitting room was merely for show.

“Greedy girl, Faith! You can eat at the Dorchester tomorrow and I daresay you won’t even spare a thought for the other girls who are justified in being somewhat jealous of your cossetted life.” Madame sniffed as she patted one of the grizzled, orange curls of her elaborate coiffure. Faith suspected a squirrel’s pelt had made its contribution. “I’m sure they wonder every day why you never have to stir yourself – or anyone else, for that matter – to get your fine clothes or a roof over your head.” Madame Chambon piled three macaroons onto her already laden plate before making a sweeping gesture that encompassed the furnishings of her surprisingly decorous private sitting room with its gold tasselled green velvet curtains and flock wallpaper. “What have you told them, Faith? About why you are here, I mean?”

Faith’s stomach rumbled as she gazed from the prints of the famous artists that lined the walls to the fine fare in front of her, ordered from Fortnum and Mason. These monthly sessions in table manners were supposed to give Faith the practise she needed to deport herself like a lady when eating in public. However, under Madame’s guardianship, Faith never actually got to try the specialties.

“Answer me, Faith. In all the three years that you’ve been here, you’ve had to do precisely nothing to justify your existence. Surely the girls have questioned you? I have my own version of the truth for them, as you know, but I’d be interested to hear what you have to say.”

Faith didn’t answer. She already knew how lucky she was, but Madame was not ready to drop the subject, despite having just crammed an entire chocolate éclair into her mouth. Faith just managed to make out the muffled words, “Every night you lie peacefully in your bed while the other girls have to earn their livings.”

Lying peacefully in her bed was not how Faith would describe the restfulness of her slumber. She was kept awake every night by the grunts and cries of ecstasy that penetrated the thin walls of her attic chamber.

Still, she’d finally learned when it was wise to respond meekly, so she bowed her head and stared at her neat kid gloves while dreaming of the delicacies Mrs Gedge would order for them when Faith really was dining with her at the Dorchester Hotel the following afternoon. The Sacher Torte Mrs Gedge had ummed and aahed over before finally choosing the baked alaska from the sweets trolley last month still haunted her. However, since part of Faith’s tutoring included how to win over reluctant gentleman ‘and make them wild with wanting’ which is how Madame phrased it, then surely Faith could persuade her American benefactress to order the Austrian chocolate specialty?

She was so busy rehearsing her words for tomorrow that she almost missed Madame’s prophetic and appalling statement.

“Well, Faith, the time has come for you to start earning your way, now.”

Faith brought her head up in shock. Was Madame teasing? When it appeared not, she gripped the table edge as she struggled for composure. For so long she’d known the reckoning would come. Yes, and with three years preparing for it, she’d believed she could meet it head-on with the necessary fortitude.

But there’d been no warning.

She began to shake, biting into her bottom lip and clasping her hands in her lap to try and keep secret the manifestations of her terror from Madame who’d only be spurred onto gloating and make her suffer even more.

“Mrs Gedge reported last month that she wasn’t entirely happy you were ready for what she has in store for you when she took you to tea, Faith.” Madame chewed noisily, unperturbed, it seemed, by the crumbs that landed on her gaudy vermillion skirts.

Faith didn’t suggest that Mrs Gedge’s dissatisfaction was perhaps the fault of Faith’s tutor – the one sitting in front of her – who knew nothing about deporting herself as a lady.

With a dainty gesture using only her forefingers, Madame Chambon raised her plate and licked at the crumbs that had not been dislodged before saying, “Fortunately, Lady Vernon is recovered at last from her long indisposition and has agreed to forget your rudeness to her from six months ago. In fact, she’ll be here shortly. Yes, she’ll soon have you passing the scrutiny of the most discerning duchess.” Madame gobbled down another macaroon with as much finesse as the dogs Faith’s father used to goad into fighting each other after they’d fought over the scraps from the scrubbed wooden table at the farm. Not that there’d been many scraps with ten children to feed.

“Should we not have waited for Lady Vernon?” Faith suggested, daringly. But she had to say something to stop herself from launching into a volley of querulous questions about exactly what form this ‘having to earn her own way’ might take.

Madame Chambon pushed aside an untouched plate of bread and butter to reach for another chocolate éclair, and sighed. “There was just so much food on the table it seemed unnecessary to wait if her ladyship was going to be late. Ah! And here she is.” Madame’s orange painted mouth turned up at a knock on the door. “Shoulders back, Faith! And make sure you don’t talk with your mouth full.”

Since this was not a danger, Faith supposed there might be some compensation in having to face her former nemesis who surely must subscribe to the belief that learning table manners required one having to eat.

Madame threw her arms wide in a welcome as the door opened to admit the new arrival. “Good evening, Lady Vernon. We’re so glad you’ve recovered from your chest ailment,” she gushed. “A good rest has done you the world of good. Why, you look ten years younger. Just as you do every time I see you, in fact. And we’re indeed humbled that you’ve consented to return.” Madame simpered at the elderly woman, dressed all in black who looked, Faith thought, even more wraith-like than usual as she pinned up the veil of her bonnet and took the seat at the table proffered by Madame who went on, “I’m sure you’ll feel even better once you’ve heard Faith’s heartfelt apology.”

Faith blushed under the scrutiny of the two pairs of expectant, unforgiving eyes, and glanced longingly at the remaining macaroon.

Yes, there were times when it was worth being abject. She mightn’t mean what she said, but if the last three years under Madame Chambon’s roof had taught her one thing, it was how to sound heartfelt and sincere when she felt anything but.

“I’m sorry for my rude comments about…” Faith hesitated. Perhaps it was best not to stir up old memories. While it must be perfectly obvious to anyone who met Lady Vernon as to why an earl’s daughter could remain a spinster into her sixtieth year, it hadn’t been in anyone’s interest – Faith’s least of all, it turned out – for Faith to have gone into quite such specific and extensive detail regarding her thoughts on the likely reasons. “I behaved like a child, though it’s such a long time ago, now, I can barely remember what was going through my head at the time. I was only seventeen and, in those days, prone to losing my temper but now I’m eighteen and, thanks to all your efforts in teaching me how to act like a lady, Lady Vernon, I’m so far from the rude and impulsive young thing I was before, you’d not recognise me today. Thanks to your thorough tutelage, I am determined that I will never speak out of turn, to you, or anyone. Indeed, I have changed! I truly believe that, confronted by a table of delicacies like this, for example, I would certainly not embarrass you or Mrs Gedge or any lovely young man or his mother who might take me out to tea by any show of greediness or lack of restraint.”

Lady Vernon’s eyes remained fixed firmly on Faith for the duration of this speech with no indication of how forgiving or otherwise she might prove to be.

After a long silence, she spoke. “Restraint?” She sniffed. “Restraint is the most important requirement of any young lady, Faith. I’ve told you this many times, so I’m glad it’s a lesson you claim to have finally learned.”

With her eyes fixed on Faith, she reached towards the remaining macaroon that sat lonely on its plate just in front of them both, her long-fingered hand hovering just above. “Please pass that to me, Faith. I can’t seem to reach it.”

Wordlessly, Faith complied, schooling her features into impassivity while she railed inside, I hate you! I hate you! as she watched Lady Vernon transport the coconut confection to her thin, bloodless lips.

“Delicious,” Lady Vernon murmured. “In fact, I believe it is the best macaroon I have ever tasted? You must surely agree, Faith, since the plate is now empty.”

She looked pointedly at the two remaining crumbs that clung to the edge of the fine china, as if to imply that Faith had eaten the rest. Then she indicated the plate of bread and butter near Madame Chambon. “Please eat, Faith. Madame Chambon and I have a leisurely afternoon at our disposal. She and I will partake of the remaining chocolate eclairs –” Her pointed chin wobbled slightly, whether from the suppression of mirth or the swallowing of bile, Faith could only guess, “while you make good work of the bread and butter with all the ladylike restraint you’re so anxious to prove.”

Just a note: I’ve done my usual trick of painting myself into a corner. Keeping Faith was supposed to be only 55,000 words long but it’s nearly doubled and is now 99,000. It’s one of my longest books, in fact!

Which means it’s a bargain at 2.99 for the first month after pre-order, after which the price will go to $3.99 where it was stay.