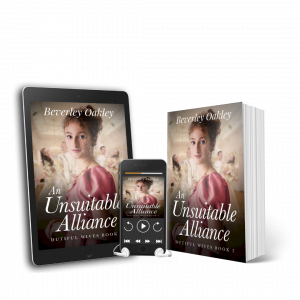 AN UNSUITABLE ALLIANCE
By Beverley Oakley

Three years after her dutifully contracted marriage, Adelaide, Lady Leeson, has fallen in love with her husband.

Desperately, unequivocally, and madly in love with the good, honest man who rescued her when she was at her lowest ebb.

The problem is that Tristan, Lord Leeson, thinks she is indeed a little mad—though he cares deeply for her.

And Adelaide’s mother will do whatever she can to enforce the fiction that her daughter has led a blameless past and that her psychological distress is based on events far more innocent than the truth.

For if Tristan were to learn the truth, how could he love her?

A passionate but tender Regency historical tale of mistakes, regret and ultimate redemption.

Excerpt for An Unsuitable Alliance

‘I am a good wife.’ Adelaide focused on her tea and hoped her mother would drop the subject. ‘I always will be.’

‘A good wife provides her husband with an heir, if not a nursery—’

‘I do my duty, mother,’ Adelaide ground out, trying to block out thoughts of what it cost her these days to ensure she appeared only to regard it as a duty.

‘As long as you strike the right note. Yes, you must do your duty, Adelaide, but you must never hint that it is an act you welcome.’ The gimlet stare made her shudder.

‘You’ve told me all this, mother, and I swear, Tristan would never guess—’

‘He’d better not, Adelaide, because you’ve been given a chance most women in your situation are not.’ Again, her mother’s eyes roamed over the room’s lavish appointments. ‘Tristan loves you, Adelaide, but he will not – I promise you – if he so much as suspects the weakness and depravity of your character. You have ever been a disappointment, but you are all I have and I am all you can rely upon. I thought I’d trained you well, that you were of my mould. How wrong I was.’

Familiar though this litany was, Adelaide once again fought the familiar shame which threatened to swamp her, though she refused to succumb to the tears that had sprung so readily to her eyes in the early days. In the six months after she and James had been parted and she’d been dragged from Milan back to Vienna before being shipped off to England, all she’d done was cry.

‘Nevertheless, as your mother, I have stood by you and I remain determined that you shall not squander this God-given opportunity. Tristan’s continued high regard is our only salvation, Adelaide. Remember that. Now come.’ Draining her tea cup, Mrs Henley rose. ‘Let us go downstairs and find Tristan so we can tell him of Aunt Gwendolyn’s letter.’
With helpless frustration Adelaide trailed after her mother. Once again Mrs Henley had taken charge and Adelaide’s ideas of independence seemed suddenly hopeless, for if they ran counter to her mother’s she knew who held the power.
At the moment, it wasn’t Adelaide.
Mrs Henley knocked and they entered as Tristan rose, his forced smile replaced by one of pleasure when he saw Adelaide. He took a step forward, extending his hand for hers, the flare in his eyes as intense as the day she consented to be his wife, and Adelaide felt an unexpected jolt somewhere in the region of her heart, her determination bolstered to bridge the distance between them, despite the oppressive presence of her mother, always a footfall away, it seemed.
‘Tristan, I—’
She stopped, pulling back as a warm, fragrant breeze stirred the papers on his desk.

The French doors from the garden had been thrown open, and the heavy tread of Hessian boots upon the wooden floor pulled their attention towards the muslin curtains which swirled in eddies, silhouetting the shape of a man: a slender man of middle height – the only ordinary thing about him – dressed in a black cutaway coat and buff breeches, who materialised before them like a young demigod, smouldering with an enthusiasm he did nothing to inhibit, for good manners were always in abeyance to the passion that ruled James’s life.

Nearly four years, it had been, and from first impressions it was as if nothing had changed. Inky curls framed his delicately boned face and his eyes were like coals burning the fire within. No, nothing had changed, she could see, for James was still like a coiled spring, eager for love, eager for life, as ready to give as he was to take … without discernment.

Adelaide froze with nowhere to go, tense with premonition while shafts of sensation, painful and familiar, tore through her.

Could this really be happening? Unwillingly, her gaze was fixed upon James’s profile, dusted with dark stubble, tapering up to angular cheekbones delineated with the slivers of sideburns sported by the fashionable Corinthians of the day.

In four years he could not be so unchanged whereas she …

She touched her face, her heart. She was a mere husk of what she’d once been. Tristan knew nothing of the passions that burned within her when her heart was engaged – and she didn’t know if he ever would, for suddenly she felt reduced to nothingness by the force of James’s personality.

She’d been his equal once – a woman of fire and vitality – and she’d loved him with a savagery that her mother claimed bordered on insanity. She’d been a child, thrust into adulthood by this charismatic older man. Married older man. But as she looked between the two men before her it was Tristan who made her heart beat faster, as much with longing as with fear of what he would think of her if he knew the truth.

James had not seen her; his gaze was focused entirely upon Tristan, and Adelaide was astonished to see a different kind of pleasure light up Tristan’s face as he was enveloped in a welcoming embrace far less restrained than her husband was used to.

‘Forgive me for coming early, Tristan. I had no choice.’ ‘Nonsense!’ The pleasure in Tristan’s voice was like
nothing Adelaide had ever heard. ‘You’d be welcome if you climbed through the window at midnight for no better reason than you needed a bed. So good to see you, James. It’s been far too long.’

She had been forgotten. Rooted to the spot, Adelaide could only wait to be acknowledged, but how she wished she could melt between the floorboards.

‘When I heard the weather promised rain and worse, tomorrow, I admit I acted with my usual thoughtless spontaneity—’

James halted, perhaps alerted by movement just beyond his peripheral vision, and Adelaide caught her breath, wiping her sweating palms nervously on her skirts as he turned his head to peer into the gloomy recesses beyond Tristan’s shoulder.

And as her glance met the familiar grey eyes of the one skeleton in her closet she’d hoped to consign forever to her past life, she felt the thread of happiness she’d found with Tristan pull dangerously taut.

The fire in James’s eyes changed to something different at the sight of her; the telling stillness of his normally active, healthy body indicated that his senses were fully alerted, and Adelaide felt hers answer with a sensation akin to having her steady world ripped from beneath her feet, leaving her to spiral into orbit until her mother’s icy tones ripped through the silence.

‘James, I trust you are well.’

They greeted each other with courtesy, concealing the brittle antipathy Adelaide knew lay just below the surface.

Her mother took a step as if to shield Adelaide from his dangerous influence. ‘We had not expected to see you, either, James, as you were due tomorrow and Adelaide and I’—she feigned regret—‘have been summoned on an urgent visit to my aunt in Lincolnshire.’

Pre-order for only 99c Amazon US | Amazon UK | Amazon AUS | All retailers HERE!