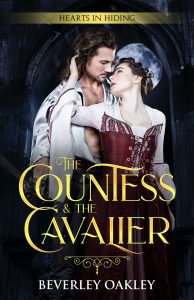 I hope everyone is doing OK wherever they are in the world.

Here in Victoria, Australia, we’re one week into another six weeks of lockdown and, as of Thursday, masks are mandated. ($200 on-the-spot fines if you’re not wearing a mask outside your house.)

Of course, it’s wearisome and worrying but there’s general acceptance that this is the only way to eradicate this virus so we can get back to business – without more deaths and without our hospitals being overwhelmed. And, of course, it’s not just deaths but the ongoing complications for those who do contract it. But that’s a whole, horrible topic on its own, that I could talk about with some authority (though it’s someone close to me, not me who fell ill).

Rather, this is my grand hurrah for the release on July 25th of The Countess and the Cavalier.

So, if you are interested in a bit of a teaser, here is the blurb, followed by an extract.

The Countess and the Cavalier

Forced to wed against her will at seventeen, beautiful Elizabeth Drummond’s loyalties are tested eight years later when her husband is imprisoned by the Royalist lover she was forced to surrender through duty.

Drummond Castle, home of staunch Puritan Silas Drummond and his beautiful wife Elizabeth, has been besieged by Royalist forces.

When the Commander of the hated King’s Men agrees to spare Silas’s life in return for a night with Elizabeth, she agrees.

Elizabeth may have been forced by her father to wed the cold-hearted Puritan, but an honourable wife will do whatever is within her power to save her husband.

But second-in-command Charles Trethveyan has other ideas. Eight years before, he and Elizabeth had been deeply in love. He’s not forgotten Elizabeth’s betrayal in relinquishing him to marry Silas.

When Elizabeth discovers that her former Cavalier lover has taken the place of his superior, and that she will spend the night with the man she’s never stopped loving, she realises she is treading a delicate tightrope.

Is Charles motivated by love or revenge? How much does Silas know and guess?

Whichever way she responds to Charles, her actions will have devastating consequences.

The Countess and the Cavalier is the fourth book in the Hearts in Hiding series but can be read on its own.

♥♥♥ Warning: This steamy, passionate romance about revenge and forgiveness will have you on the edge of your seat and reaching for the tissue box. ♥♥♥

Read for Free in KU or Buy here.

Drummond Castle has just been overrun by the ‘enemy’ and my heroine makes a bargain with the Commander of the King’s Men:

“You promise to guarantee my husband’s life?” she whispered. “In writing?”
Reynolds nodded, his pen still poised above the paper. “In writing. With all my men as witnesses. Tomorrow your husband will walk out of Drummond Castle, with this paper guaranteeing his free passage, if you agree to my proposition. And so will you, depending on your willingness, Lady Drummond.”
Elizabeth was conscious of Silas’ pent-up hatred. Reynolds’ supercilious smile filled her with a similar emotion. She dared not trust him but they were helpless. Icily, she said, “Allow me five minutes alone with my dear husband so I can persuade him of the merits of this bargain.”
“A final tender moment between the two of you seems fitting.”
Above her husband’s roared objection, Elizabeth inclined her head. “You are accountable to a great many men, Captain Reynolds.”
She caught Silas’ look, mad with rage. “Do not do this to save me, wife, for I’d rather be dead than the husband of a whore to this…”
Nettled, she managed coolly, “And I’d rather see you walk free tonight so you can fight another day and our children will still have a father when this war is over.”
“The agreement is between your wife and myself.” Reynolds looked at Silas with contempt. “I’d throw you to the wolves if I could.”
They all turned at the sound of desultory clapping.
A man appeared from the darkened outer reaches of the room, raising his head, which caught the light from beneath the shadow of his broad-brimmed hat. Like Reynolds’, his hair was light and curling, but it was his own rather than a wig and he was a little younger. Judging by the fine silk and leather of his clothes, he was clearly of similar rank.
“If now is the time for bargains,” he said, crisply, “let me propose one of my own.”
The look in Reynolds’ eye made plain that he half expected what it might be, and that he was not pleased.
“Captain Charles Trethveyan at your service.” The newcomer rose from his bow with a flourish, his smile trained on Elizabeth, who lowered her head, more terrified than she had been hitherto of anything else that the fierce pounding of her heart and the fire in her cheeks would betray her. To her husband, most of all.
She could not look at Charles, though her initial glimpse of him showed him to be as handsome as she remembered. His physique was stronger now that he was a man, and his jaw had firmed, but his mouth was curved in just that half ironic way she remembered so well. Her heart thudded to the pit of her stomach. Had he just arrived? Did he know he’d find her here? A million unanswered questions crowded her brain, pushing aside her concern for her husband’s fate and the implications of the bargain she’d just made with Reynolds.
The two Cavaliers were engaged in low dialogue. Silas’ shoulders heaved beneath his suppressed emotion. He knew exactly who Charles Trethveyan was. That he was the suitor over whom Elizabeth had waged a long and protracted battle with her father.
He wouldn’t know that it was his image Elizabeth conjured up every night to block out the unpleasant reality of her husband. The cold hard truth was, however, that Charles had not been there when she’d needed him.
The reflection enabled her to finally look at him as he and Reynolds continued their discussion, terminated abruptly by Reynolds’ harsh tones.
“Another time, Trethveyan!” Reynolds rose swiftly, closing the distance between him and Elizabeth as he thrust the signed parchment at her. “Our agreement in writing. Now, I’m tired and hungry and I have no wish to entertain company.” His tone was churlish though he darted a calculated glance in Silas’ direction as he added, “I wish to rest as I’ll need all my energy for tonight.” He clapped his hands. “Take them away. Separate quarters for both of them.”
“You granted my request for five minutes with my husband,” Elizabeth reminded him, stepping forward.
He waved at one of the guards. “Five minutes—that’s all.”