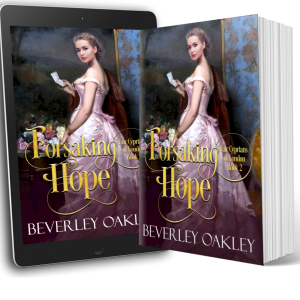 The noise from 23 Half Moon Street could be heard from the pavement as Hope stepped out of the hackney into the yellow glow of a gas lamp. She paid the jarvey, took a few steps towards the wrought iron gates that surrounded the elegant townhouse, then paused.

This was the moment of truth. She could carry on boldly, right up to that front door and confront the ‘what might have been’, effectively ending all those beautiful daydreams with the truth of what she’d irrevocably become.

Or she could turn around now and effectively tell Madame Chambon to go to hell.  And Wilfred, too. Yes, there’d be a glorious split second of satisfaction before she’d be cast out in the three-seasons-old dress she’d been wearing when Wilfred had delivered her to Madame Chambon’s exclusive Soho brothel.

Daydreams. That’s all her thoughts of rebellion were.

Just like her fond imaginings of what might have developed between Mr Durham and herself if things had been different.

Even with all the spirit in the world, Hope had long ago accepted that only Madame Chambon stood between her and starvation.

“Good evening, Madam, please come in. We’ve been expecting you.”

She supposed it was hardly surprising it wasn’t the butler who opened the door and invited her in with an extravagant flourish that almost caused the young man before her to lose his balance. The no doubt disapproving family retainer would have been dismissed for the evening, as suggested by the sounds of revelry within. Hope was surprised. Had Mr Durham changed so much or was he nothing like the rather serious gentleman she’d thought him? She’d been attracted by his earnestness tinged with a suggestion of suppressed passion—his character had seemed in direct contrast to her own wild, rebellious spirit—so that when he’d taken her hand at the Hunt Ball and drawn her into the shadows that last night, she thought wistfully, the greatest excitement had rippled through her.

His gaze had been intense and filled with longing. As if he were yearning for something he feared he could never have. That’s what it had felt like to Hope, tremulous and aching with the knowledge they could never bridge the divide that separated them. She, the penniless vicar’s daughter, revelling in her special evening before she was shipped off to her governess position, and he, the son of the great Durham family of Foxley Hall, the venerable manor that had looked down upon the rest of them for the past four hundred years.

But that was all in the past, and there was no look in the eye of the clearly bosky young man currently leering at her that suggested a longing for what he could never have. More like a brash assessing as to whether he might sample the wares before Hope was led like a lamb to the slaughter—the surprise cheering-up gift for Mr Durham, as she’d been informed.

Bile stung the back of her throat. What would Mr Durham think?

And did she have the courage to do what she wanted, which was to turn tail and run?

Instead, Hope clasped her reticule to stop her hands from trembling and adopted her most dignified manner as she inclined her head. She’d honed deference to a fine art at the risk of a backhander from Wilfred, and as the price for survival working for Madame Chambon.

“Well, well, I was told Madame Chambon’s girls rivalled the Goddess Aphrodite for beauty and pleasure-giving,” the young man went on, standing aside to admit her. “You certainly do not disappoint.”