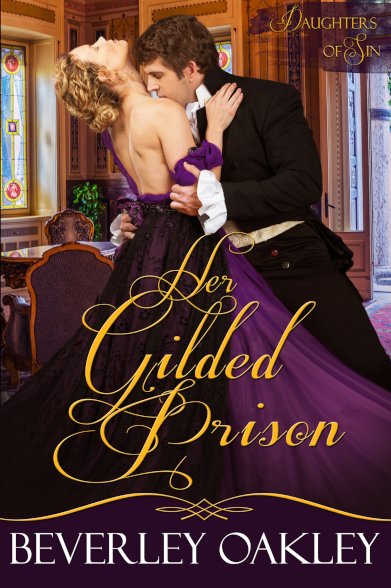 She was determined to secure the succession, he was in it for the pleasure. Falling in love was not part of the arrangement.

When dashing twenty-five-year-old Stephen Cranbourne arrives at the estate he will one day inherit, it’s expected he will make a match with his beautiful second cousin, Araminta.

But while proud, fiery Araminta and her shy, plain sister, Hetty, parade their very different charms before him, it’s their mother, Sybil, a lonely and discarded wife, who evokes first his sympathy and then stokes his lustful fires.

As Stephen introduces Sybil to every pleasure she’s been deprived of, duty and passion become a deep and mutual love. But with the unexpected arrival of a contender to the estate, Sybil realises that what she’s set in motion to save the family might have tragic consequences.

HER GILDED PRISON is Book 1 in the Daughters of Sin series, a Regency-set ‘Dynasty’ that follows the sibling rivalry between Viscount Partington’s two nobly-born and three illegitimate daughters as they compete for love during several London Seasons. HER GILDED PRISON can, however, be read as a stand-alone.

Sybil realises that in order to preserve the happiness of her younger, plainer daughter, Hetty, she must provide an heir to the estate – whatever the cost to herself. It is then she propositions the newly ousted heir, Stephen, to help her.

She opened her eyes when Stephen cleared his throat. She was conscious of the warmth emanating from him. Once again, the scent of bergamot and horses assailed her nostrils; a pleasant, manly scent she recognized with a rush of familiarity from the occasion he’d comforted her over Lizzy Hazlitt’s mare.

He showed no trace of embarrassment and seemed only to want to clarify the matter. “So if your hopes for entering into this unusual coupling are realized, have you thought how you might explain an apparently immaculate conception to your husband?” He seemed both amused and concerned.

Sybil shook her head and avoided his eye, now wishing she could turn back the clock. How could she have been so bold? Nevertheless, she said truthfully, “I believe Humphrey would prefer anything rather than hand the reins to Edgar.” She smiled grimly. “Anything, that is, except do his duty with me.”

She’d barely finished before Stephen had both her hands in one of his large ones and the other clasped round her waist. Highly irregular yet the most exciting compromising situation she’d ever been in.

“I can see you wavering, Lady Partington, so am spurred on to encourage you not to lose heart.” She saw the excited anticipation swirling in the depths of his warm gray eyes; warmer and more encouraging, even, than hitherto. Sybil could not believe it. He actually looked as if he’d been promised the greatest of gifts. “I believe it is an excellent idea, and I accept with the greatest delight—on one condition.”

It was hard to breathe. She winced from the pain of her fingernails digging into her palms and her heart thumped even harder as she wondered why she didn’t cast everything to the wind and simply take to her heels like a coward. Instead she whispered, “What is your condition?” as his face filled her vision and his gently curved lips drew nearer.

“That you regard this…solution…as more than just a conscious act of duty.”

An act of duty. That’s exactly what she’d intended it.

A tremor ran through her as she closed her eyes, relishing the light caress of his hand over her hair. Her body tingled with expectation; so that she could fully pledge her commitment when he added, brushing her lips with his fingertips, “And that you respond to me accordingly.”

9 reviews for Book 1 – Her Gilded Prison