Do you love a good dose of suspense mixed in with your romance?

Then enter my competition for a chance to win a specially dedicated copy of The Glittering Prize. Just let me know what you’d like on the “Dedication Page” and I’ll have it professionally printed, for your library and your reading pleasure.

Here’s a bit about it. 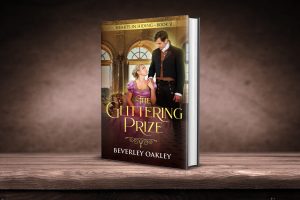 With a murderer hot on her heels, becoming the greatest treasure in a bored aristocrat’s collection may be Jemima’s only hope of survival.

Blue-stocking Jemima Percy’s talent for ancient languages gives her father the advantage as an archaeologist and treasure hunter. When the pair are on the verge of revealing their greatest discovery, Jemima’s father is brutally murdered.

Forced to surrender honour and reputation in order to survive, Jemima is finally offered a way out by handsome and charming Lord Ruthcot, who has inherited a world-renowned collection of treasures.

But accepting his help means she must relinquish all hope of reclaiming the glittering prize that was the culmination of her father’s life’s work.

Or does Lord Ruthcot have his own solution to Jemima’s problems? One that was staring her in the face all this time?

The Glittering Prize is Book 2 in the Hearts in Hiding series but can be read as a standalone. It follows The Duchess and the Highwayman. 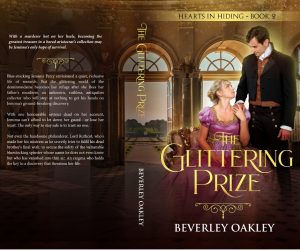