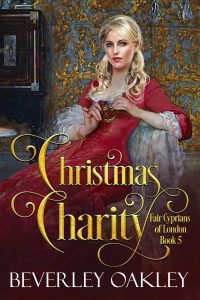 Reluctant courtesan, Charity, has found true love with Hugo, her first and only client. But when poet and artist, Hugo, is tricked into gambling away his impending inheritance, Charity finds herself at the mercy of Madame Chambon and her infamous house of ill-repute.
Can the two young lovers thwart the conspiracy between Hugo’s social-climbing father, and slippery cousin Cyril, so Hugo can make Charity his Christmas bride?

What Readers are Saying:

4.0 out of 5 stars Interesting Mistress/Protector Relationship that Goes Sideways

The beginning of this book starts with the tail end of a racy scene, and given that this book is about the relationship between a woman in a brothel and her gentleman protector, you might be given to think that all the book would be a bit saucy. But it truly is not. Rather, this unlikely kind-hearted pair has actually fallen in love over the course of their 2-year relationship, but they are about to be tried in the worst way as forces seek to separate them for their own nefarious purposes.

With the roll of a dice Charity’s hope for happiness is gone and deep in her heart she knows she has no right to believe in the fairy tale not a girl in Madame Chambon’s House of Assignation, a brothel girl. Hugo is beside himself now he is being forced to go to India for at least 2 years leaving his love all alone. I have read all the tales in Beverley Oakley series about Madame Chambon’s brothel and each one has been excellent. In this one I felt for the two main characters so young so in love and now being forced to separate with so many questions left unanswered. I loved the twists in this book they weaved a beautiful story. This well-written gem is well worth the time you spend reading I highly recommend it.
Read for FREE in Kindle Unlimited or Buy Here.