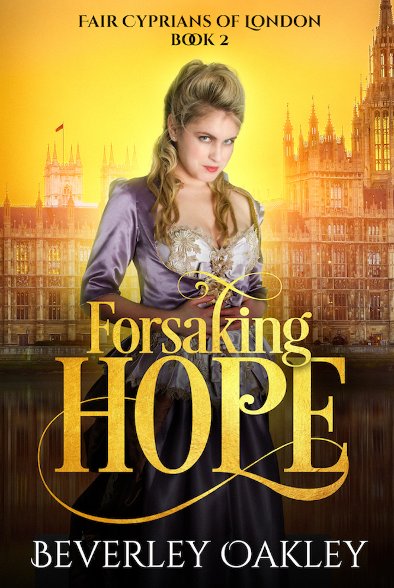 Forsaking Hope is Book 2 in the Fair Cyprians of London Series but can be read as a standalone.

If there was a name to tip Hope into the abyss of despair, she was hearing it spill from Madame Chambon’s lips now as the older woman directed Hope to take a seat in the reception room, presumably so Madame could loom oppressively over her.

With her hands on her ample, expensively padded hips, Hope’s benefactress—procuress, employer, and gaoler were other monikers—sent Hope a beetling look that needed no interpreting. Regardless of Hope’s true feelings, Hope must project the required show of warmth and delight at being the chosen one.

Madame patted the side of her faux curls. Years of hot irons had reduced her hair to the texture of wool, but her crowning glory these days was supplemented by the lustrous locks of those girls who dared cross her—before they were thrown back into the street from where most had come.

Nevertheless, Hope had to make her resistance clear. Surely Madame, who knew her history, would understand her loathing for this man, above all others. “I shan’t do it,” she whispered. There was little evidence of the wilful child and wild adolescent who’d been the despair of her family. “I won’t—”

Outside, the noise of the traffic rumbling over the cobbles and the shrill calls of competing vendors settled upon the tense silence. Madame Chambon’s other girls, ranged around the sumptuously appointed room on red velvet upholstered banquettes, watched the exchange with prurient fascination. Hope knew it had been a calculated ploy of Madame’s to conduct her interview in public so that Hope would serve as an example to them.

No one crossed Madame Chambon.

The shrill cry of a fishmonger caused Madame to look pointedly out of the window. With something between a smile and a sneer, she smoothed a tangerine Marcel wave. “Is that where you plan to return, Hope? The gutter?” Her nose twitched, and in the sunlight that filtered into the room, the grooves chiselled between mouth and chin were thrown into harsh relief, highlighted rather than hidden by the thick powder she used to conceal her age.

Madame Chambon’s comfort, now and into retirement, depended on obedient girls. Hope knew that as well as anyone. She’d had to bury her rebellious streak just to ensure food in her belly.

The Frenchwoman raised a chiselled brow and began to pace slowly in front of her girls. A painter with an eye for beauty would have been ecstatic at capturing such a spectacle on canvas. The discerning young man-about-town who visited 56 Albemarle Street frequently admitted to being overwhelmed by the range of delights Madame Chambon’s girls offered in addition to the visual.

“You forget yourself, Hope. I put a roof over your head and deck you out as handsomely as Mr Charles Worth ever did for his most discriminating customer.” There was acid in Madame Chambon’s tone. “But for me, you’d be starving and glad of the pennies you could trade for a grubby stand-up encounter in a dark alley.” Madame Chambon thrust out her bosom and breathed through her nose, her response a calculated warning to the other girls, arranged in various languid poses about the ornately decorated reception room, that intransigence would not be tolerated.

“Mr Hunt has requested you.” She paused, and when Hope remained silent, though her stance and expression left no one in any doubt as to her horror regarding this enforced assignation, went on. “Remember what I told you—what I tell all my girls when they first come here? The past must be forgotten the moment you step over my threshold. You are reborn, remodelled, refashioned into the most exquisite delectation of womanhood. A marquess, a prince, is well recompensed for the tidy sum he hands over in order to enjoy your sparkling wit, to converse with you in French, or if he chooses, on philosophy…to enjoy your charms…and,” she added significantly, “your gracious hospitality and tender ministrations to his needs. That is our agreement, and you are no different. If Mr Hunt wishes you, Hope, to attend him at his residence, then you will go.”

Faith, one of the kinder girls, patted Hope’s arm in silent solidarity. Hope didn’t expect any of them to speak up in her defence. Not when they all relied on Madame Chambon as much as she did to provide them with the necessities of life. Anything more than that was part of a strict contract that indentured a girl for life, unless she was able to secure a generous benefactor to settle Madame’s severance bill. The fine clothes were part of the charade, necessary to entice a more elite clientele. Hope’s exquisite wardrobe did not belong to her, though she’d have forsaken all the Spitalfields silk and Valenciennes lace for the freedom of the gutter and to be mistress of her own destiny—and her body—if she could only be sure of a plate of gravy and potatoes every second day.

Closing her eyes, she hung her head, the carefully coiffed curls that fell forwards brushing against her tear-streaked cheeks. It was as well that they not be in evidence. Tears, weakness, vulnerability were like a red rag to a bull where Madame Chambon was concerned.

“How long…do I have to prepare myself?” She was not so stupid she couldn’t admit defeat when there was no alternative. Obduracy was beaten out of one, but tears ensured a girl got the very worst next assignment. Their clients weren’t all marquesses and princes, though they did require a very fat pocketbook.

“Tomorrow.” Hope repeated it in a leaden tone, and stared at her hands clasped in her lap; white-knuckled. As white as the rabbit-fur that edged her fashionable black-and-white striped satin cuirass. Hope had the tall, slim figure suited to the scandalously tight tie-back skirts that were all the rage, the back flowing into a train adorned with elaborate swags and trimmed with bows. She’d turned heads the length of Oxford Street as she’d promenaded along the pavement following a walk through Hyde Park earlier that afternoon. In fact, for the first time in two years, she’d almost felt happy as she’d pretended a sense of freedom in the afternoon sun, blocking her mind to the prison to which she was returning.

She drew in her breath and forced herself to be brave, knowing the punishment she’d invite for daring to speak her mind. “Please tell Mr Hunt I will see him again under sufferance.”

Madame Chambon’s voice was surprisingly caramel. “Well then, now that you have made your objection clear, Hope, you will be pleased to hear that Mr Hunt’s desires are not only motivated by fond memories of your no-doubt mutually satisfying congress. I believe he wishes to acquaint you with news of your family.”

Hope hid her shock. “I have no family.” With care, she modified her tone so it was as leaden as before though emotion roiled close to the surface.

“Not even a sister?”

Hope raised her chin. Here was the chink and Madame knew it. The woman did her research.

Aware that the other girls who surrounded her were tense with anticipation, Hope struggled not to respond. Camaraderie existed at surface level, but one never knew when it might profit one to have the dirt on a fellow prostitute. It was, clearly, another reason Madame Chambon had chosen to make this conversation public.

“Mr Hunt will see you at nine tomorrow evening,” said the so-called Frenchwoman who, it was whispered, was from the gutters of Lambeth, not Paris. “At his apartments in Duke Street. Now go and prepare yourself for Lord Farrow. Married to a monolith like the venerable Lady Farrow, he likes his girls vivacious and free-spirited. There’ll be less coin in your pocket if you sully the transaction with that long face, Hope.”

Be the first to review “Forsaking Hope”