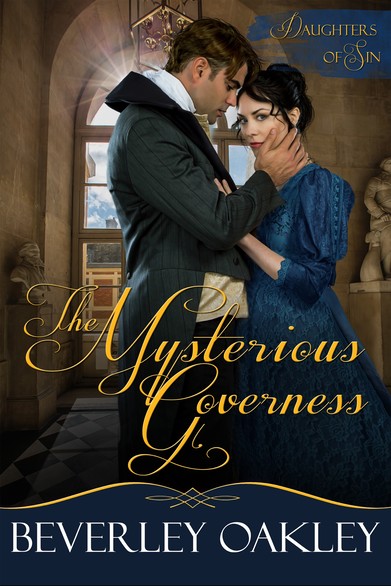 Two beautiful sisters – one an illegitimate governess, the other a celebrated debutante – compete for love amidst the scandal and intrigue of a Regency London Season.

The Mysterious Governess is Book 3 in the Daughters of Sin series but can be read as a stand-alone as it features the sibling rivalry between Viscount Partington’s two nobly-born and three illegitimate daughters from a completely different perspective.

The Daughters of Sin series has been described as a Regency-set ‘Dynasty’.

All other retailers here.

Cocooned alone in the musty, uncomfortable interior of the hackney, now that Cosmo had, with clear relief, washed his hands of her, Lissa had gone only a couple of blocks when she was jerked out of her unhappy musings by a terrified cry, a head-rattling lurch, and the grinding of wheels accompanied by a deafening whinny.

Disoriented, she flailed in the dark for something she could grip as she felt the hackney round a bend on only two wheels. The side window smashed inward as it veered too close to a building and Lissa screamed as she was thrown against the door. For a moment the vehicle slowed, then, suddenly gathering speed, it sped on. Now she could hear the shouts of others in the street as they either leapt clear of the runaway horse or perhaps tried to arrest its progress.

Hunching her shoulders, she covered her face and braced for the inevitable impact, a prisoner in this capsule and under no illusions it would end well.

Despite her flights of fancy, Lissa was pragmatic by nature. Either she would be snuffed out when the hackney came to a final, messy stop or went into the river, or she would be looking for a way to explain her multiple injuries and damage to Miss Maria’s ball gown while hoping she still had a job.

If the outcome were too bad she may have to return home to her mother. She felt ambivalent about this. While she’d never been more lonely than in the six months she’d spent as governess in the Lamont household—not good enough to be spoken to civilly by her employers and too good for the other servants to offer friendship—she did enjoy the bustle of London.

The inevitable impact came, truncated by a terrible sound of splitting wood and grinding metal, and Lissa was thrown against the side of the carriage, hitting her head on the window frame before slumping to the floor.

For a few moments she lay curled up in a ball, breathing heavily and waiting in case there was a dramatic codicil to her terrifying adventure.

Tentatively she flexed her hands and feet and opened her eyes, screaming when she found her right eye without vision as she drew away her fingers, sticky with what she knew must be blood.

Seconds later the carriage door was forced open and she found herself staring at three goggling men, two with blackened faces half covered by filthy, ragged mufflers, the third startling clean by contrast, with chiseled elegant features, a thatch of flyaway brown hair beneath his topper, and an expression of concern that blazed her into renewed life.

“Are you all right, Miss? Here, let me assist you. Are you alone?” The clean, handsome gentleman elbowed his way forward and extended his hand into the gloomy interior, and as she gripped it, she felt an almost overwhelming sense of safety and relief.

Lissa was a quick thinker, and had her excuse ready in answer to his surprise. “The horse bolted before my chaperone had a chance to enter the carriage.”

Now she was outside, being assisted to stand, shivering in the darkness. The young man divested himself of his coat, which he wrapped around her, and as the other two characters melted into the darkness to assist the cab driver, Lissa’s gentleman protector lowered his face to study hers.

“You have a cut just above your eye,” he said, whipping a snowy-white handkerchief from the pocket of the coat he’d just relinquished. “Ah, not deep, fortunately. Now, what shall we do with you? You’re probably in shock, in which case a little brandy would be just the thing, but of course I must return you to your chaperone immediately. She’ll be in a panic. Here, lean against me. You’re shaking.”

Lissa’s knees felt they might give way any moment. A short distance away the jarvey was urging his horse onto all four legs while the two men in mufflers had recruited help with righting the smashed equipage.

“Where have you come from and where did you leave your chaperone?” asked the young man, adding before she had time to answer, “But where are my manners? Introductions are in order.” His grin by the light of a nearby lamp post was enough to do what any amount of brandy might not have achieved. It warmed the cockles of Lissa’s heart. Shyly, she introduced herself.

“A pleasure to meet you, Miss Hazlett,” he said, caging her hand on his arm as he led her to the pavement. “And I am Mr. Ralph Tunley, parliamentary secretary and confidante to all manner of rakes and rogues but, sadly, in my own right, a poor, struggling hopeful with not a feather to fly with. Which is why I am unable to offer you a carriage ride home, since it is quite beyond my means. Shall I accost the driver of this passing hackney and send you back to your chaperone, or dispatch a note to your family immediately to let them know what has happened?”

Lissa shook her head as she glanced at her ball gown, nearly doubling up with dismay when she saw the damage inflicted upon it.

“I’m sure you have plenty more just as lovely,” he reassured her. “Not that a great beauty like you needs silk and diamonds to enhance what nature has so abundantly bestowed upon you. There, wasn’t that a pretty speech? I can practice such courtly sentiments without fear of censure since you will shortly be whisked out of my orbit and I will never see you again, though perhaps I shall hear news of your marriage to some great scion I could never hope to rival. Goodness, though, but I think that you are a beauty beneath the grime and blood.”

2 reviews for Book 3 – The Mysterious Governess