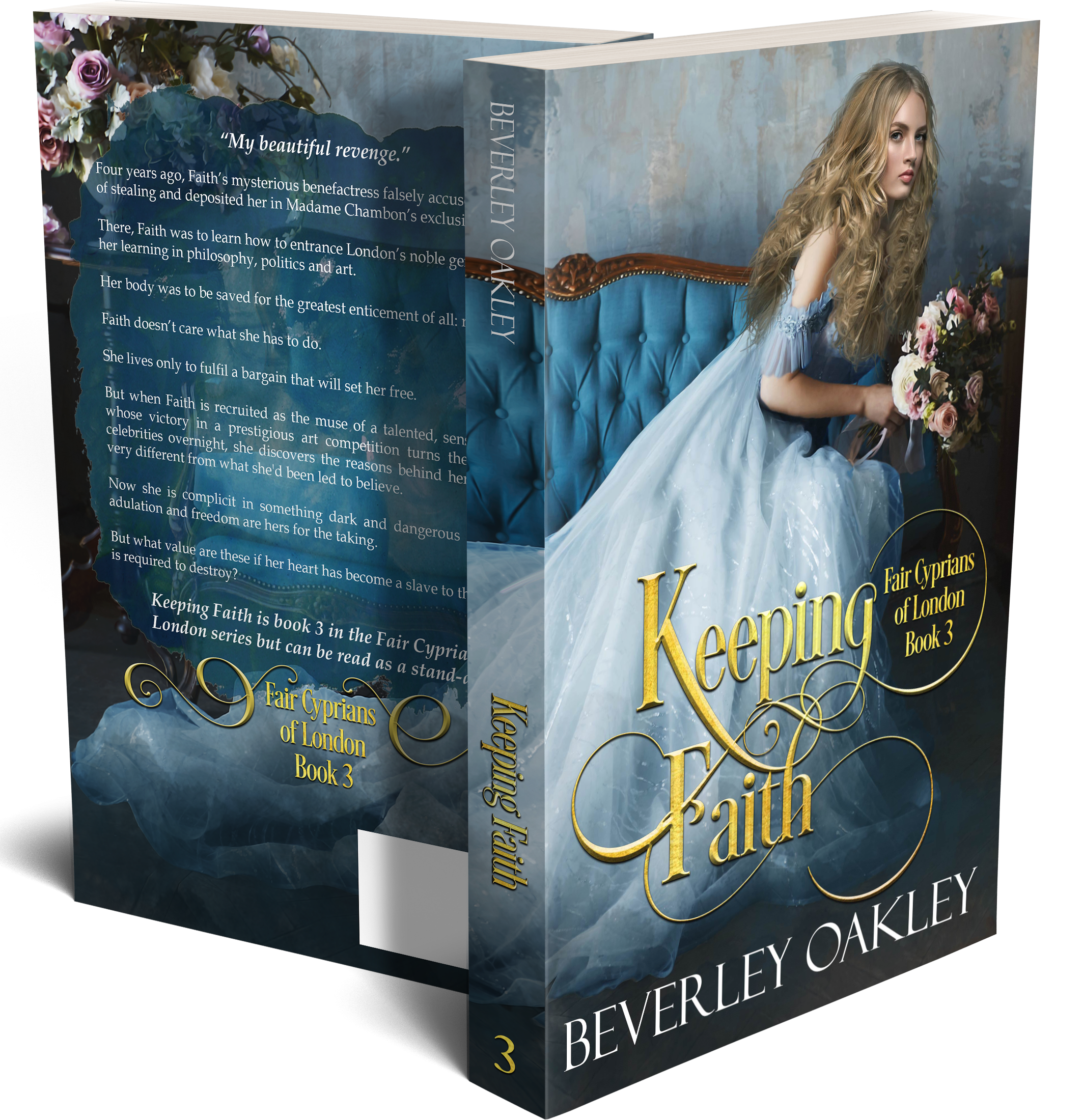 “My beautiful revenge.” For four years this is how Faith’s mysterious benefactress has described the girl she falsely accused of stealing before depositing her in Madame Chambons’ exclusive brothel.

There, Faith was to learn how to entrance London’s noble gentlemen with her learning in philosophy, politics, art.

Her body was to be saved for her greatest enticement of all: revenge.

Faith doesn’t care what her mission is. She lives only to fulfil her bargain to Mrs Gedge so she can be free.

But what value is freedom if her heart becomes a slave to the man she is required to destroy?

“Yes, this old church is as cold as the grave and it’s time we settled ourselves for lunch,” Lady Vernon announced, mistaking Faith’s shiver of fearful foreboding.

“So, Mr Westaway knows we’ll be at Mrs Bromley’s Tea House, then?”

Lady Vernon sent her an arch look over her shoulder as they trod the thin red carpet towards the open double doors. “Of course he does. Someone has to keep you on track if you’re to succeed in this venture. I’d have hoped Mr Westaway would be eating out of your hands by now.”

“There’s not been much time.” Faith gritted her teeth as she obediently followed Lady Vernon’s bulky shadow down the nave. “I can’t let him think I’m fast.”

“No, a girl brought up in a brothel could hardly let a gentleman think that, could she?”

Faith wasn’t sure she’d heard correctly for the muffled words were indistinct and partly swallowed up by the ringing of their shoes upon the stone steps.

Furious, she hurried to keep up. “I might wish my circumstances were different and, believe me, there’s no love lost between Mrs Gedge and me, but I am better educated than any of the debutantes that have no doubt been paraded in front of Mr Westaway’s nose and more beautiful and regardless of where I lay my head at night my virtue is unblemished. And will remain so!” Faith ground out as she descended the steps beside her chaperone into the street. “So don’t you make false aspersions about my good character.” If ever there was proof that Lady Vernon cared little for Faith and had taken her on purely for the money, this was it.

“Ah, now, my dear, only a short walk and then we can rest our weary bones and see if Mr Westaway has taken the bait.” Lady Vernon spoke as if she hadn’t heard Faith, her smile cloying, her tone dripping with false pleasure at the journey ahead.

“You make me feel like a … dog or a…rat caught in a trap,” Faith muttered. The more she spent time with this abominable woman the less able she was to hold her tongue. She and Lady Vernon were partners in a grubby intrigue of which no one else must be the wiser. Sadly, it meant Lady Vernon was the only person she could speak honestly to.

Lady Vernon swung round, and as her eyes met Faith’s her slack jaw snapped shut, giving her the look of a lazy blood hound at rest transforming instantly into a pointer, alert and on the hunt.

“We are both rats caught in a trap and you’d do well to remember that, young lady,” she said, taking Faith’s arm to lean on as if the pair were grandmother and grand daughter enjoying a gentle stroll. “That’s what poverty does to a woman!” She sniffed. “At least I have good breeding as my insurance.”

“And I have beauty as mine,” Faith snapped back, tipping up her chin and wishing her searing gaze could reduce Lady Vernon to a pile of cinders.

Unscathed, and unconcerned, apparently, Lady Vernon cast Faith a dismissive look before her eyes settled for a second too long, lower down the girl’s body. “Yes, it’s all you have to trade on, girl, so don’t make a mull out of this one opportunity to secure your future – and make mine more comfortable until my next call-out to chaperone some horsey looking blue-blood whose mama can’t summon the energy.” A look of triumph wiped away her peevishness and the fingers of her left hand dug more deeply into Faith’s arm as she raised her right to hail a gentleman hovering by the front entrance of Mrs Bromley’s Corner Tea House.

“Goodness, Mr Westaway! What a surprise to see you here!”

Suddenly Lady Vernon looked like a sweet old lady with not a venomous thought in her age-ravaged, ugly old head, Faith thought as she was borne along upon a tide of hopefulness; the tide of hopefulness being on Lady Vernon’s account that she would be paid for notching up a triumphant success.

As for Faith, she didn’t know what she felt. She didn’t want to trade on her beauty and have to do things with men that didn’t involve her heart.

Mr Westaway was pleasant enough. He was rich and handsome, too. Actually, he was really rather kind and sweet and he certainly didn’t deserve what Mrs Gedge and Lady Vernon had in store for him.

As Faith intercepted, then analysed, the look he sent in her direction, the foundation of the three women’s collective plan suddenly seemed as rackety and shoddy as the multiple threatres they’d visited to honour the town’s great bard that had either been swept away or dismantled to be utilised for something newer and better.

“Miss Montague.” He rose from a gallant bow and there was genuine pleasure in his smile. Faith’s doubts dissipated. She had managed to conquer. Enough to get things underway, at any rate. Why else had he come in search of her after dismissing her the previous afternoon? “I hoped I’d find you in town.”

“You did?” Faith tried to look coy when in fact she was overcome by an unexpected wave of desperation. He was nice and she didn’t want to make him fall in love with her and have to do the things things he thought he wanted. Things he wanted because he was a man and so easily susceptible to a woman’s lures but things Faith didn’t want to do because her heart wasn’t engaged and more and more she had the conviction that she’d hate herself if she ‘traded’ herself like Lady Vernon insinuated her only means of getting ahead in life.

“I…I can’t do justice to your eyes, Miss Montague.” He looked anxious as he tried to express himself. Right now he was the artist – tortured by his creativity – not the diplomat. He tried again, waving his hands as if that might make his meaning clearer. “The painting is so close to being finished. I’m nearly happy with it but–” He broke off and sent her a beseeching look. “Would you come back and sit for me one last time?”

Faith glanced at Lady Vernon then back at Mr Montague. He did look rather appealing, hanging upon her acceptance.

With a slight shrug, she deferred to her chaperone. “It’s up to Lady Vernon, really. I know she’s set on the idea of returning to London on tomorrow’s early train but if she can be persuaded I don’t mind.”

Was that the right thing to say? Would her lack of enthusiasm strike the right note with both Lady Vernon and Mr Westaway? She had to appear pliable; a girl who knew her place. Not too eager yet also hint at a flicker of interest. To bolster this last she fluttered her eyelashes and looked demurely at her hands as if suddenly shy. That should be a nice finish to the whole charade before Lady Vernon fixed the time for tomorrow.

Yet her intake of satisfaction was expelled on resignation. She didn’t feel true to herself to be taking manipulation to such extremes.

Still, she thought, the moment she had her cheque for five hundred pounds from Mrs Gedge she could do as she pleased. She’d never again have to worry about pretending; or worry about what anyone else thought. How pleasing that would be.

“Tomorrow then. At ten o’ clock?” He smiled, and Faith thought what pleasant grey eyes he had. “In the garden where the light is good. It’ll be a fine day, I believe.”

Buy at all retailers here.

Be the first to review “Keeping Faith”