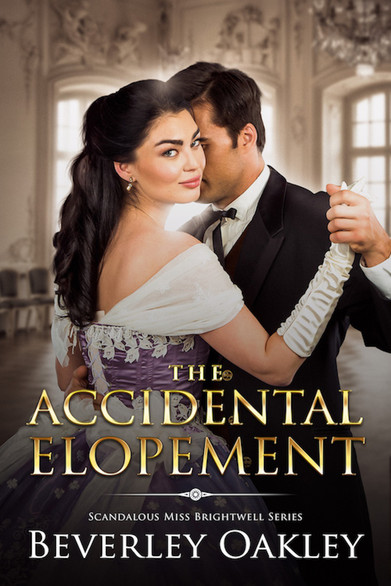 A seven-year secret. A tragic misunderstanding. Can love outwit fate in this twisted tale of misadventure and thwarted dreams?

Earl Quamby’s niece, Katherine, and Jack, a foundling home lad adopted by a local family, have been loyal friends for as long as they can remember.

This is Book 4 in the Scandalous Miss Brightwell series but it can be read as a stand-alone.

As Jack is about to leave England to make his fortune and Katherine is being courted by two eligible suitors, they unexpectedly realise their friendship has blossomed into passionate love. A love, they are warned, that has no future.

Despite a brave attempt to defy the forces keeping them apart, tragedy results and the pair is separated.

When chance throws them together seven years later, Katherine, newly widowed, is being pressured into a marriage not of her choosing to avoid scandal and Jack feels he must honour his pledge to the worthy Odette whom he met in India and whose father is dying.

Katherine knows that revealing a long-held secret may win Jack to her but she also knows conflicting obligations from past and present may tear him apart.

Can master matchmakers, Fanny, Antoinette and Bertram Brightwell, outwit fate in its latest attempt to keep these star-crossed lovers apart and deliver them the happiness they deserve?

Katherine struggled to regulate her breathing as she felt her way along the cold plastered walls of the corridor. She was in complete darkness now, the strains of the orchestra that drifted from the ballroom drowned out by the pounding of her heartbeat.

Soon she’d find sanctuary far from the frenzied throng. Just a few minutes in a silent, empty space was all she needed to gather her wits and decide how she could present herself as a worldly sophisticate rather than the overwhelmed country girl she felt attending her first London ball.

She paused, resting her back against the wall, and ran her hands over the skirts of her ballgown. The cream coloured silk satin skirts, embroidered with gold thread and beads, were held out by layers of tulle, ending just above her ankles to show off her pink satin dancing slippers, while the bodice was cut low and wide with the most beautiful puffed sleeves. Katherine had barely contained her excitement about tonight as Mary, her maid, had helped her into her new gown then dressed her hair in elaborate tiny plaits, swathed around a high twist of hair at the back.

Indeed, she looked every inch the debutante of the season, ready to make her mark in the annals of high fashion and in the gossip pages before waltzing off with the prize catch of the season.  With both her mother and aunt still notable beauties and married to a viscount and an earl, respectively, Katherine was certain she would soon continue the family tradition.

She knew hiding in the dark was ignominious at best and cowardly at worst. And of course her mother would wonder where she was.

She took a deep breath, turned then hesitated.

What if Young George was eyeing the entrance from this dark corridor to the ballroom, ready to pounce?

The moment her gauche young cousin had spied her an hour earlier and commandeered her for her first dance, the event had lost its lustre. She supposed she shouldn’t still call him Young George since he was only six months older than she was. But, when she’d arrived at her aunt and uncle Quamby’s London townhouse ready to take London by storm and had met her cousin for the first time in more than two years, he seemed just as deserving of his childhood moniker as he’d ever been.

Now, instead of pulling her hair to get her attention as had been his wont when they were children, he seemed to be continually puffing himself up and appearing wherever she turned, asking if she admired the new coat his tailor had just sewn for him and could she imagine what muscles he had now he’d taken up pugilism.

On the dance floor his hands had been clammy and he’d held her too close as he’d waltzed her round and round the room. She’d wanted to stamp her foot and give him the kind of dressing down for which she’d been famed as an eight-year-old. But eighteen-year-old misses did not stamp their feet – either in public or in private. Instead, they smiled demurely while they suffered whatever indignity or boredom any gentleman chose to visit upon them. Because that was what a lady did.

The second dance, she’d sat out. She didn’t mind being passed over and had been happy to sit by her mother’s side while Lady Fenton had launched into a spirited gossip with her sister, Aunt Antoinette, whom she’d not seen for some months.

When the next dance had yielded Young George making a beeline in Katherine’s direction, she’d decided it was time to very swiftly sidle away and seek out whatever access she could find to the regions beyond.

She stopped and turned again. It was too early to go back. Her nerves were still jumping all over the place. Right now it was far less overwhelming to grope blindly along the passage in the dark in search of the library where she could sit in front of a fire or peruse an interesting bookshelf for a few minutes than it was to contemplate returning just yet.

Just two more dances should be sufficient. Her mother wouldn’t miss her for two. Three might raise her ire but then supper would be served and hateful George would be all but vanquished if Katherine claimed she was too tired for another polka or whatever musical entertainment followed the ham and buttered bread.

No one had thought to light a candle sconce and this second corridor turning she’d taken was as black as a dungeon. Katherine couldn’t even see her hand but she wasn’t frightened of the dark. No, Katherine was not fainthearted.

Yet she did squeal with complete shock and surprise when, taking another step, her progress was impeded by a very large object and, with no warning at all, she found herself flying through the air, landing with a painful jarring of her wrists upon the cold, hard flagstones.

“Good Lord!” came a disembodied young male voice in the dark before a groping hand located a piece of Katherine – namely a hank of hair – which caused her to shriek even louder when it was quite unnecessarily tugged. Whether this was to establish who or what she was, she had no idea – and perhaps neither did the tugger for immediately a profound apology was issued before the groping hand was operating with complete abandon in the dark.

This time it found Katherine’s breast just as the voice said in tones of utter mortification, “Forgive me! Are you hurt? Here, let me help you. That’s what I was trying to do, I promise. I didn’t realise you were on the ground? Take my hand. Really, I can’t apologise enough.”

Katherine had made one unsuccessful attempt to stand but it was a struggle in her flounced skirt and multiple corded petticoats. She swatted away the supposedly helping hand and hissed something unintelligible – somehow unladylike language seemed less of an offence when she couldn’t see to whom she was speaking.

But when the disembodied groping hand entered her orbit once more – in fact, brushing the bare flash above her garter and getting in a good squeeze of her thigh flesh, her temper which had never been one of her strong points, snapped and she lashed out with a sharp slice through the inky air.

A loud yelp made her realise she’d perhaps been a little peremptory and certainly too violent in this unladylike action and even though she felt disinclined to apologise she did say, ungraciously, “I’m sorry I hit you but a lady can only take so much of all this groping in the dark. I mean…what were you doing?”

Be the first to review “The Accidental Elopement”