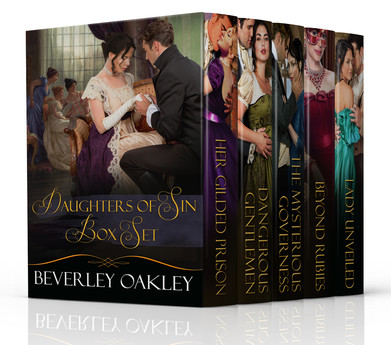 Four very different sisters compete for love during an exciting London season: a celebrated actress with a heart of gold, a shy yet daring wallflower, and the artistic, illegitimate daughter of a nobleman. Caught up in a high-stakes game of intrigue and deceit orchestrated by their sister, the ton’s reigning beauty, each must play their part to bring a dangerous traitor to justice while finding a man deserving of their love and special talents.

Buy the complete Daughters of Sin Box set for a 25% saving over individual titles.

Her Gilded Prison ~ She was determined to secure the succession, he was in it for the pleasure. Falling in love was not part of the arrangement.

When dashing twenty-five-year-old Stephen Cranbourne arrives at the estate he will one day inherit, it’s expected he will make a match with his beautiful second cousin, Araminta-not fall in love with her lonely, neglected mother.

Dangerous Gentlemen ~ Shy, self-effacing Lady Henrietta was the wallflower beneath his notice…until a terrible mistake has one dangerous, delicious rake believing she’s the “fair Cyprian” ordered for his pleasure.

But when the innocent debutante is mistaken for her common namesake “Hetty” and embroiled in the Regency underworld, she finds herself shockingly compromised by the dashing, dangerous Sir Aubrey, the very gentleman her heart desires. And the man Araminta has in her cold, calculating sights.

The Mysterious Governess ~ Lissa Hazlett lives life in the shadows. The beautiful, illegitimate daughter of Viscount Partington earns her living as an overworked governess while her vain and spoiled half sister, Araminta, enjoys London’s social whirl as its most feted debutante.

When Lissa’s rare talent as a portraitist brings her unexpectedly into the bosom of society, she’s embroiled in a scandal involving Araminta and suspected English traitor Lord Debenham. But with an unlikely ally – charming and besotted Ralph Tunley who is also Lord Debenham’s underpaid, enterprising secretary – Lissa cleverly navigates a perilous web of lies to ensure everyone gets what they deserve.

Beyond Rubies ~ Fame. Fortune. And finally a marriage proposal!

Kitty La Bijou, celebrated London actress, mistress to handsome Lord Nash and the unacknowledged illegitimate daughter of Viscount Partington has
escaped her humble beginnings and found fame, fortune and love. But the respectability she craves eludes her. When she stumbles across Araminta, her nobly-born half-sister, on the verge of giving birth just seven months after marrying dangerous Viscount Debenham, Kitty realises respectability is no guarantee of character or happiness.

But helping Araminta has unwittingly embroiled Kitty in a scandalous deception involving a ruthless brothel madam, a priceless ruby necklace and the future heir to a dazzling fortune.

Choosing honor over desire, Kitty joins forces with her sister, Lissa, to bring to justice suspected traitor, Lord Debenham. Complicating matters is the fact Debenham is married to their half-sister, vain and beautiful Araminta – a woman with a dark and dangerous secret. One which Kitty must expose if she’s to achieve justice for all.

Here’s an Extract which occurs after Kitty has left the love of her life, Silverton, due to her notion of honour.

Wearily Silverton stepped across the threshold into his dimly lit townhouse, surrendering his hat and coat. He wouldn’t go straight to bed, though it was late and he had an early start with meetings at the Foreign Office.

“M’lord, you have a visitor waiting for you in the drawing room.”

Silverton couldn’t have been more surprised—and delighted—at the identity of his unexpected visitor who leapt up in a rustle of silken skirts as the butler discreetly withdrew.

“Kitty! What are you doing here?” He barely dared hope yet he had to ask the question, the affirmative to which would have made him the happiest man on earth. Right now he felt like the loneliest. “Have you come back to me?”

“Oh Silverton, you know I can’t do that when you’re to be married in a little over a week.” She looked truly regretful yet her smile, tinged with sadness, was the most glorious sight he could remember seeing as the last few weeks of London revels blurred across his mind.

“You don’t love me quite enough to do that, eh?” It was a low shot but, emboldened by the fact he’d just knocked back more than a few brandies shortly before, he wanted to needle her into some declaration that would hint at the truth of her feelings for him.

“I love you too much to force you into such a conflict with your sense of honor, my dearest.”

He was disappointed when she took a step back as he approached and said, softly, “Please don’t touch me, Silverton, for you know how susceptible I am to your overtures and I’m really here for a very noble reason which would be entirely spoiled if it resulted in anything physical between us.”

“But the physical between us has always been so mutually satisfying, hasn’t it? And we both feel exactly the same about each other as we did—” he paused, then added with difficulty— “before you left me.”

“That might be true but that’s not what I’ve come here to talk about.” Her words were truncated on a slow sigh for Silverton had succeeded in breaching the distance between them and now his fingertips were gently caressing her cheek.

She closed her eyes but did not move other than to whisper, “It’s about Lord Debenham.”

“Such a ghastly man, indeed,” Silverton murmured, hoping that concurring with what he knew she felt about the man was appropriate under the circumstances. “I hope you’ll stay well clear of him.” Carefully he drew Kitty into his embrace. He needed to manage this encounter with the greatest skill. Holding the most exquisite woman he’d ever met, the woman he’d made his mistress when he’d wanted so badly to make her his wife, simply reinforced how right she made him feel. She was bright, intelligent, a lively companion, and so very beautiful.

And she was so hell-bent on doing what was right.

Silverton was hell-bent on doing what was right, too, which was why he’d never held his wife-to-be in anything more intimate than a waltz hold for fear it would be the death-knell to his resolve that he could act in the interests of his family and marry Octavia.

“And what is it about villainous Viscount Debenham that brought you to my townhouse so late at night?”

Kitty twined her arms about behind his neck and nestled her head against his chest. Her soft sigh of contentment was like a hot needle in his most tender parts for Kitty was so transparent about her affection for him.

She smiled up at him, biting her lip as a shadow of doubt crossed her features. “I told him you were a spy.”

Buy the complete Daughters of Sin Box set for a 25% saving over individual titles.

Be the first to review “Daughters Of Sin – Boxed Set. Books 1-5”