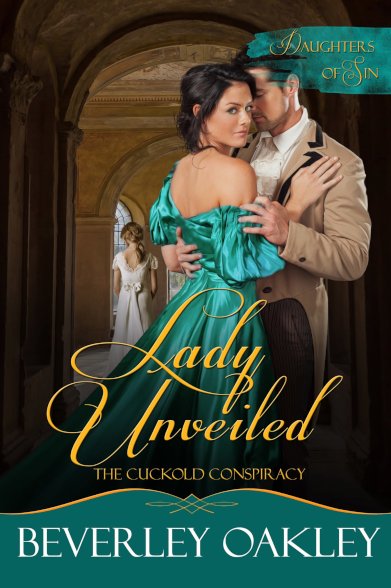 In the thrilling conclusion to the Daughters of Sin series, the turbulent love affairs of four very different sisters are wrapped up.

Kitty is a celebrated actress with a heart of gold; Lissa is a shy yet daring wallflower with a talent for portraiture that has the potential to bring down the highest in the land. Their two half-sisters, shy, sweet Hetty and vain and spoiled Araminta who is the ton’s reigning beauty, have enjoyed a life of privilege as Lord Partington’s nobly born daughters.

Caught up in a high-stakes game of intrigue and deceit orchestrated by Araminta, each sister must play her part to bring justice to a dangerous traitor and find happiness for themselves.

All other retailers here.

Lucinda’s angry, discordant note on the piano brought Lissa’s head up sharply. It seemed her disgruntled charge had finally—like Lissa—had enough of the muffled and completely inappropriate giggles of Lord Beecham’s ‘special’ friend. For the last hour, Lissa had sat quietly sewing by the window, as well behaved as any good governess could be suffering such trials.

Meanwhile, seated on an elegant blue and silver silk-striped sofa opposite the piano, Lord Beecham seemed wholly occupied with his increasingly regular guest, Lady Julia, and until now, impervious to his ward’s attempt to regain his attention.

Lissa slanted a glance at Lucinda. When Lucinda was angry, she was not a pretty girl. Her peaches and cream complexion became red and mottled; her rosebud-shaped mouth flattened into a harsh, thin line, and her normally luminous blue eyes seemed almost black beneath beetling brows. This was how she looked now as she hunched on the piano stool, glowering at Lady Julia—or Lady Ledger, wife of Sir Archie Ledger if she were happy to be properly identified, which, judging by the surreptitious fondling the pair were engaged in today, she would not.

Lady Julia, supposedly an earl’s daughter fallen upon hard times, was purportedly Lucinda’s very young godmother. She arrived at Lord Beecham’s London townhouse at regular intervals, heavily veiled, to instruct Miss Lucinda Martindale in the musical arts, though she could not—as far as Lissa could tell—play a note. At least, Lissa had never heard her play a note, though she’d heard a lot of other noises emanating from Lady Julia during her visits to his Lordship’s bedroom between music lessons.

Finally, it seemed, Lucinda had achieved what she’d been after—Lord Beecham’s undivided attention.

“What an infernal noise!” he exclaimed, the dewy adoration as he’d gazed at Lady Julia instantly replaced by a thunderous scowl as he jerked his head around to look at Lucinda. “I spend a fortune on your musical education! Surely I should expect better than that!”

Lucinda’s mobile face went through a gamut of emotions—devastation then outrage, however her mouth remained a thin, tight line. It was quite obvious the girl was desperately in love with her benefactor into whose care she’d been placed the previous year.

It was upon the death of her parents and younger brother during a scarlet fever outbreak in their village that Lucinda became a ward of Lord Beecham. But while Lucinda was obstinate and demanding of her governess, she had never, as far as Lissa knew, openly challenged Lord Beecham.

Nevertheless, there was an underlying challenge now as the girl asked, “Perhaps Lady Julia would care to demonstrate how Pachelbel’s Canon in D should really sound.”

Lady Julia, who had attempted to discreetly put at least several inches between her thigh and that of his Lordship’s on the sofa, smiled sweetly. “My dear, I don’t want to show you up.” She patted her bright golden hair, then purred, “Please, play it again. With just a little more practise you will have mastered it, and Lord Beecham and I are quite happy for you to entertain us while I continue to outline to him my hopes on how your general carriage, demeanor and…might I add without offense…character itself might be improved sufficiently to make your come-out without undue embarrassment to either yourself or his Lordship.”

Lissa was interested to see how Lucinda would take this. With her head still bowed over her embroidery frame, she didn’t miss the flashing eyes above the pretty, pert nose of her young charge, and Lord Beecham’s wolfish, apparent approval of Lady Julia’s saccharine demeanor.

As you can see, conniving Lady Julia has inveigled her way into the life of another of the Partington clan. But there’s lots more skulduggery, passion and intrigue to come.