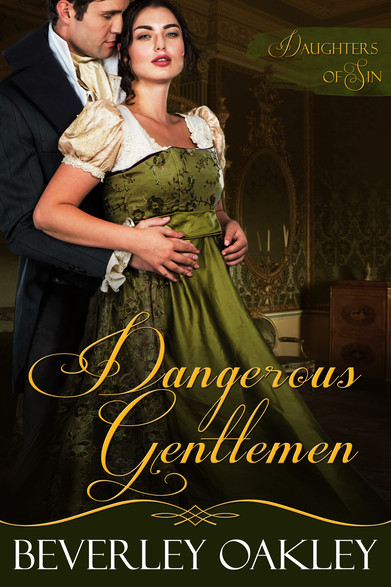 She was the wallflower beneath his notice…until a terrible mistake has one dangerous, delicious rake believing she’s the “fair Cyprian” ordered for his pleasure.

But when the innocent debutante is mistaken for her common namesake “Hetty” and embroiled in the Regency underworld, she finds herself shockingly compromised by the dashing, dangerous Sir Aubrey, the very gentleman her heart desires. And the man Araminta has in her cold, calculating sights.

Branded an enemy of the Crown, bitter over the loss of his wife, Sir Aubrey wants only to lose himself in the warm, willing body of the young “prostitute” Hetty. As he tutors her in the art of lovemaking, Aubrey is pleased to find Hetty not only an ardent student but a bright, witty and charming companion.

Despite a spoiled Araminta plotting for a marriage offer and a powerful political enemy damaging his reputation, Aubrey believes he’s been set up to suffer his greatest betrayal at the hands of the little “concubine” who’s managed to breach the stony exterior of his heart.

Until the ‘the little brown peahen’ reveals her true colors.

Hetty, curious by nature, found this too tantalizing an opportunity to resist. With a furtive look around her, she hurried left and up the stairs, at which point two corridors at right angles disappeared into the gloom for only a pair of candle sconces shed any light. Choosing the one to the right, she found herself face-to-face with a series of closed doors.

Foolish, she chided herself. Of course they were closed and she could hardly open them. As she turned back toward the ballroom, a faint light shining from the crack beneath a door that was slightly ajar gleamed beckoningly.

With a furtive look over her shoulder, she approached it, then stood motionless, staring at the light beneath. The mending woman had said Sir Aubrey had left for the evening and the night was still young. Could the gentleman who occupied this room—Sir Aubrey, perhaps—have left a lamp burning?

That would be dangerous, surely? Hetty would only be doing her duty to ensure that a candle or light were extinguished to prevent a fire hazard.

She gave the door a little nudge with her foot and it swung open.

Excitement rippled through her.

“Hello?” she asked in a low voice. She took another step into the room. “Is anyone in here?”

Silence. An argand lamp stood upon the mantelpiece. A low fire burned in the grate before which was a table, against which were propped several items, including a familiar silver-topped cane. Her breath caught. The last time she’d seen that cane was when Sir Aubrey had exchanged several words with Araminta in the street as Hetty had been bringing up the rear with Mrs. Monks. Of course Sir Aubrey had not looked twice at her, excusing himself before having to be introduced to the younger sister and the chaperone who’d nearly closed the gap.

Heart hammering, Hetty closed the door behind her and went to pick up the cane. How fortunate to have stumbled into Sir Aubrey’s room, she thought when she observed the fine coat lying upon the bed, apparently discarded in favor of what he was wearing tonight.

He really was a nonpareil, wearing his clothes as if they were an extension of his athletic physique.

But how such a scion of good breeding and genteel society could be guilty of such a heinous crime as treason, Hetty could not imagine. And surely the story of the runaway wife was a gilded one. It was all the stuff of make-believe and Cousin Stephen was only telling Hetty he was dangerous to curb her schoolroom daydreams.

Turning, she saw half protruding from beneath the suit of clothes what appeared to be the edge of a silver, filigreed box. It was partly obscured by the overhang of the counterpane, as if it hadn’t properly been returned to its hiding place.

A moment’s indecision made her pause but soon Hetty was crouching on the floor, closing clammy fingers around the box. Might it contain secrets? Ones that would reveal, conclusively, what Cousin Stephen claimed was true?

Hetty fumbled for the catch. Dear Lord, this was too exciting for words. Perhaps Sir Aubrey was a secret agent working for the English, and Stephen had no idea.

The sound of footsteps made her gasp as the door was flung wide. Hetty let the lid of the box fall and retreated into the shadows as Sir Aubrey strode into the room.

He was breathing heavily as he shrugged off his jacket with a curse, raindrops spattering into the hissing fire as he raked his fingers through his hair. A curious stillness overtook him and he froze, obviously sensing all was not as he left it.

He sniffed the air. “Orange flower water,” he muttered, stepping closer to the fire, fumbling for the tinderbox on the mantelpiece to light another candle, no doubt so he could plumb the depths of the shadows.

Immediately he was thrown into sharp relief and as he stared at Hetty, it was not his look of shock and suspicion that made her scream—but the copious amounts of blood that stained his shirtsleeves and once-snowy linen cravat.

“God Almighty, who are you?” he demanded as his gaze raked her finery. “You’re no parlor maid, that’s for certain.”

Gaping, unable to formulate a sensible answer, Hetty finally managed, “What happened to your arm, Sir Aubrey? Are you injured?”

“Sir Aubrey, is it? So, you know who I am!” He grunted as he looked down at his arm, the bloodied linen shredded over the long graze. “It’s not as bad as it looks and I assure you, I gave a good account of myself.” His laugh was more a sneer. “Indeed, my assailant lies dead in the gutter.”

Hetty gasped. “Dueling?” Myriad questions crowded her mind. Could this be to do with Araminta? Had Sir Aubrey left Araminta in the middle of the ball to fight some other contender for her affections?

“Dueling?” he repeated. He shook his head and Hetty drew back at the coldness in his eyes when earlier there had been such warmth as he’d gazed upon Araminta. “There was nothing noble about my activities this evening. I was set upon in a dark alley. A short scuffle ensued, I drew my knife, then…” With his hand, he made a gesture like the slitting of his throat, adding, “I am slightly wounded but as I said, my attacker does not live to repeat the insult.”

Her horror clearly amused him, for his eyes narrowed while his generous mouth quirked. He looked like an incarnation of the most handsome demon she’d ever seen depicted in the fairy stories she loved to read.

Trembling, Hetty could only stare like the star-struck debutante she was. She felt like the heroine in one of Mrs Radcliffe’s novels she’d been forbidden to read.

“We all have enemies, madam.” His eyes gleamed, reflecting the dancing flames in the fireplace. Hetty put her hand to her chest, thinking this was the most exciting moment of her life as he said softly, “Enemies who must be eliminated  if  we  are  to breathe freely.”

Tilting his head, he regarded her with renewed interest. “As for you,” he said, taking a step forward and putting out his hand to touch her cheek, “You are not at all what I was expecting.”