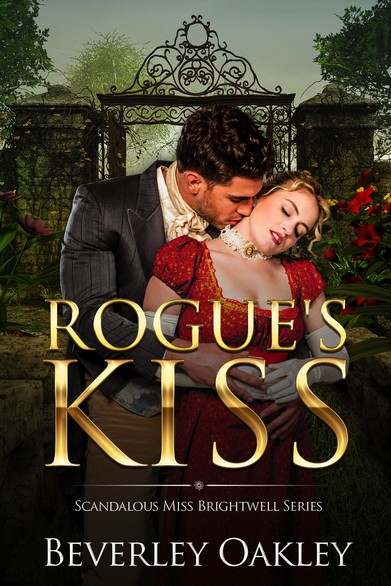 Would a potential suitor be bolder if he were told the lie that the object of his desire had only six months to live?

Sweet, pretty Thea Brightwell’s dull, quiet life with her crotchety aunt is about to be turned upside down by a visit to Bath and a chance encounter with handsome Mr Grayling.

Order in Digital and Print Format

Buy on any platform HERE.

ROGUE’S KISS can be read as a stand-alone. It follows award-winning racy Regency romp RAKE’S HONOUR.

What Readers are Saying about the series:

“I LOVED beautiful Thea’s story and couldn’t put it down losing hours of sleep!”

“The unexpected twist at the end made me smile and think…yes that’s perfect.”

“Nicely written and enjoyable Historical romance with a little steam.”

*Note: Due to the respective natures of the various Brightwell heroines, Rogue’s Kiss is sensual rather than steamy while Rake’s Honour is hot and steamy.

This extract takes place during the ball at which Thea catches the eye – and, in turn, falls for – handsome rogue, Mr Sylvester Grayling.

Sylvester stared after Miss Brightwell in genuine bemusement. The scorching looks the young lady had sent him could not have been misconstrued. Could she have been playing games?

“Charming chit, ain’t she?” Bertram Brightwell’s bluff laugh cut into his musings and he turned to raise an eyebrow at the young man who was accompanied by his beautiful sister, the youngest, blonde – not to mention, scandalous – Miss Antoinette who’d snared an earl and whose supposed antics behind closed doors titillated society.

“Pray enlarge?” He saw that Miss Antoinette’s blue eyes danced with mischief. Although she’d recently given birth to Lord Quamby’s heir she was as flirtatious as he imagined she must have been before she’d become his countess. He knew he was staring but the stories he’d heard about her were incredible; that the earl gave her complete licence to seek out pleasure discreetly as her reward for silence regarding his own peccadilloes. Dangerous ones, he understood, that courted the death penalty.

Before he had a chance to respond Bertram said, suddenly somnolent, “No telling what a gel will do if she’s only got four months to live.”

It tumbled from Antoinette’s lips as an expletive and Sylvester’s own as a gasp of dismay. “Four months?”

Miss Antoinette looked shocked. “What are you saying Bertram?” she demanded.

Bertram sighed heavily. “I overheard Dr Horne telling Cousin Thea the terrible news several months ago. Don’t you wonder why she looks so sad and won’t dance? Her heart cannot be exposed to sudden shocks although…” He looked contemplative, “I did also hear the doctor say that gentle pleasures and mild, controlled excitement might well prolong her life.” He cleared his throat, adding, “That is, by a couple of months or so, only.”

Sylvester shook his head, his horror echoing Miss Antoinette’s who clearly had not been privy to the news of her lovely cousin’s imminent demise. “Poor young woman,” he murmured. “So lovely and so…”

“Doomed,” Bertram supplied with a sigh. “Still…” He brightened, “she is to be commended on her stoic acceptance of her miserable lot. Her aunt has brought her to Bath to take the waters but sadly is so concerned for her niece’s health she will allow Miss Brightwell no pleasure whatsoever.”

“She would not allow me to even dance with her,” Sylvester recalled, the rejection taking on a different hue. “Is she… so reduced in health?”

“Oh, Miss Brightwell would dance a jig if she were allowed. She simply craves something that will draw her out of the unhappy final few months she’s been allotted.” He shrugged. “But what chance is there of that?”