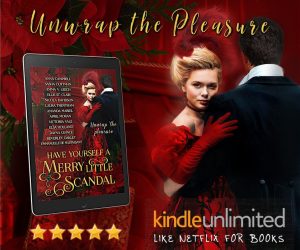 Have Yourself a Merry Little… Scandal!

From the snowbound Scottish Highlands to the glittering ballrooms of London, our fearless heroines enter the Christmas season in pursuit of their heart’s desire.

But, the course of true love never did run smooth… especially when SCANDAL is afoot.
Tales of romantic adventure, sizzling passion, and heartwarming holiday romance.Unwrap the pleasure…

You can read these twelve gorgeous Christmas novellas for FREE in Kindle Unlimited, or get them here:

And here is a taster of each story…

Rogue for Hire – by Sasha Cottman
When heiress Alice North engages the scandal managing services of Lord Harry Steele, she gets a first-hand lesson in steamy, wicked behaviour.

The Highlander’s Christmas Lassie – by Anna Campbell
A chance to mend two shattered lives. After years of searching, the Laird of Dun Carron finds his lost beloved and their son, but the reunion doesn’t go as expected.

The Lady’s Guide to Scandal – by Emmanuelle de Maupassant
With her name already mired in scandal, posing as the fiancée of reckless explorer Ethan Burnell can only spell trouble–or make Cornelia Mortmain so notorious she’ll become irresistible. The game is on!

The Courtship Caper – by Beverley Oakley
When the scandalous Brightwell sisters wave their matchmaking wands, Christmas becomes a comedy of errors for two hapless couples who find themselves paired with their imperfect match.

A Scandalous Secret – by Laura Trentham
A secret passion is revealed when a spymaster’s daughter and the man pledged to protect her are forced to shelter for the night in a cottage—with only one bed.

Fate Gave Me a Duke – by Amanda Mariel
Christmas brings unforeseen complications for the Duke of Cleburne and Lady Juliet Gale. Will they give into fate, or fight against it?

Duncan’s Christmas – by Ellie St. Clair
Though the woman he captures one freezing winter night is not the woman he intended to nab, she just may be the one intended for him walked out on, truly is.

Bedeviled: A Russian Pursuit – by Elsa Holland
Prince Ilya Petroski is honor-bound to play the rake and dominate London’s gossip columns; cruel are the fates to introduce him to the love of his life, the gentle-hearted Seraphina Seymour.

At the Mistletoe Masquerade – by Dayna Quince
Lady Cassandra’s plans go amiss when a kiss gone too far turns into the scandal of the season.

The Christmas Courtesan – by Victoria Vale
Moonlighting as a Gentleman Courtesan seems like the best way to earn a dowry for his sister—until a scandal during a Christmas house party leads Roger Thornton toward a fiery and unexpected love.

Her Virgin Duke – by Nicola Davidson
A lost wager sparks an unlikely alliance and a wicked affair between England’s stuffiest duke and London’s Mistress of Sin.

And if you’re following my Scandalous Miss Brightwells series, here’s the blurb for my inclusion in the set, above:

Widowed Sebastian Wells has spent a year searching tirelessly for the girl he was forced to give up after honor required him to wed another.

When he discovers Venetia working as a lowly companion to the exacting Dowager Duchess Lady Indigo at a Christmas house party he’s attending, their secret rendezvous turns scorching.

But Sebastian’s hostesses, the scandalous Brightwell sisters, have paired him up with a lively, golden-haired debutante they believe will be his perfect match. And this young lady is determined to make everyone believe the lie.

Will honor once again compel Sebastian to act against the desires of his heart?

Read in all KU stores here.