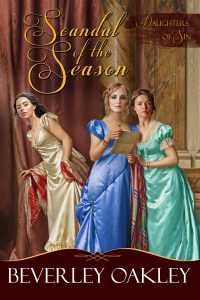 Have you wanted to meet the major characters who appear in my Daughters of Sin series, all in one place?

I’m quite excited as it’s the culmination of the whole five-book series … and yet it’s setting everything up, right at the beginning, though with that said, Scandal of the Season is perfectly readable as a neatly wrapped-up story, on its own.

If you’ve already read Her Gilded Prison, I hope you’re wondering what tricks vain and flighty Araminta (the daughter of my heroine) might be getting up to, after her London debut ended so disastrously.

So, without further ado, here’s a snippet of Scandal of the Season. It takes place after my heroine, Charlotte, a respectable, very young window, is reluctantly charged with acting as chaperone to Araminta.

You can pre-order for only 99c here.

Charlotte cast a cursory look over her own ensemble in the hopes she’d not forgotten something essential. Like her overdress. Lord, she could almost imagine the horror of discovering right here and now that she was half dressed in her preoccupation with ensuring Araminta did justice to her parents.

Or rather, didn’t scandalize them. Indeed, Charlotte had been driven to the limits of her forbearance, having to massage Araminta’s vanity to avert a nasty altercation. The girl had got it into her head that she would dampen her petticoats so as to make her gown cling to her in the way she believed all the society women deported themselves.

As for Charlotte, a quick glance at her reflection in a large silver urn reassured her that she was decent, at any rate, though she nevertheless felt self-conscious at the amount of flesh she was revealing. For the bodice was tiny. Barely three inches deep before the lovely rose silk net over its satin under-dress flared into a froth of flounce about the hem.

It was a relief to finally be at Lady Dervish’s ball and to step back into the shadows to sip her orgeat and watch the splendor as a bystander while Araminta was led into a cotillion by an eager-eyed, sandy-haired gentleman, introduced to them as Mr. Roberts.

She was just bringing the rim of her glass to her lips when her elbow was jolted and, with a cry, she felt rather than saw the contents disappear down the front of her gown.

Or between her breasts, if the truth be told.

“Goodness, miss, I beg your pardon! Here! Allow me to make amends.”

A tall, dark-haired gentleman, clearly on his way out of the ballroom in seemingly something of a hurry, hovered between Charlotte and the doorway, clearly conflicted as to how best to respond to the gravity of the situation. For it was indeed gravely concerning to look down and see the dark stain still spreading over her silk gown.

He, meanwhile, had a rather hunted look about him as he glanced into the crowd before looking down at Charlotte once more, saying as a furrow appeared between his brows, “I say, we have met, haven’t we?”

Charlotte felt the fine hairs at the back of her neck prickle into awareness. Here was one to watch.

“I’m Mrs. Wendover, Miss Araminta’s chaperone and, of course we have met, Mr. Durham.” She tried to imbue her words with the censure that would surely bring a flush of shame to his cheeks but instead his eyes conveyed relief.

“Mrs. Wendover! Wonderful that you’re not some debutante, which of course I now see you are not, and which therefore means I can render assistance. Come, let me rectify the damage done.”

Before Charlotte could protest, his long fingers encased her wrist and he was drawing her out of the ballroom, even as she resisted, saying, “Mr. Durham! Did you not hear? I am Miss Araminta’s chaperone. I need to be on hand when she comes off the dance floor.”

“She’s dancing the cotillion? Even better!” Mr. Durham drew her a few yards from a side entrance that Charlotte had not even noticed and was suddenly brandishing a snowy white handkerchief as he pressed her against the wall.

Well, that’s what it felt like with him looming over her in the most intimate manner, his head dipped and a look of studied concentration upon his face.

But not concentration upon the task of rectifying the damage he’d done to Charlotte’s gown. No, he was buying time for some ulterior motive, Charlotte suspected, for no gentleman could obviously dab at a lady’s bosom.

She extracted the hovering handkerchief from his unresisting fingers and ministered to her own damp chest, while he said, rather distantly, “Just a couple more minutes, Mrs. Wendover. I’ll have you safely back by the dance floor as we hear the music come to an end. I just need to wait a little while until my pursuer loses the scent.”

“Your reputation precedes you, Mr. Durham,” Charlotte said, drily. She was fast losing patience. There’d been something most unsettling about the sudden proximity of such a confident and handsome piece of masculinity but, as he was concerned only with his own interests, Charlotte was not going to indulge him any further. “You are being pursued, are you? Well, I don’t wish to be anywhere near when you get the punch on the nose you no doubt deserve.”

“What did you say?” He jerked his face down, eyebrows shooting upwards, frowning with greater concentration as if he were only noticing her for the first time.

“I am suggesting that lack of gentlemanly conduct deserves a response though I am sorry if you are trying to escape a bout of fisticuffs. And I was simply remarking that I would rather not find myself in the midst of the fray.”

“Fisticuffs? No, no, I’m being pursued by a young lady who is quite anxious that I ask her to dance. And I have no wish to dance whatsoever. Your misfortune provided me the opportunity to leave the ballroom. So, Mrs. Wendover, you have no idea the extent of my gratitude.”

His warm brown eyes were making Charlotte feel things that she did not like at all. She sniffed and sent a rueful look at her gown. “Well, I’m glad you’re not about to get your nose punched, and I’m glad I helped you out of a minor difficulty. Perhaps you’d like to return the favor.”

“Return the favor?” he repeated, taking the still snowy handkerchief back from her. “Why, I only wish I could.”

His mouth quirked as he held it just an inch from her bosom, stretching into a wide grin as she squeaked, “I didn’t mean that. I meant that perhaps you could petition our hostess to procure some way of hiding the damage. I cannot go back inside with my dress so stained. And the dance is nearing its end, meaning I soon must do my duty and ensure that Miss Araminta—”

“Is returned directly to your caring control. Why, I don’t wonder you’re so anxious to expedite your duty,” he interrupted. “I wouldn’t want to be in your shoes, Mrs. Wendover. Chaperone to Miss Araminta?” He clicked his tongue. “No, indeed, I wouldn’t wish it on anyone.”

“Why, Mr. Durham, you’re a fine one to talk, the way you led Miss Araminta on when I surprised the two of you by the elm the other week.”

The eyebrows shot up again. “The way I led Miss Araminta on? Now here I must object, Mrs. Wendover. You have quite got the wrong end of the stick. I happened to be out riding, minding my own business, when I spied a mighty black stallion galloping toward me, followed by a cry from a beautiful girl, exhorting me to race. Do you think that was a challenge I would turn down lightly? When we reached the river and dismounted, it was not I who suggested anything untoward. You must believe me.”

“Which means I must believe the worst of Miss Araminta? That doesn’t sound very gentlemanly, Mr. Durham.”

“This is really too much, Mrs. Wendover. Either I am a liar or a gentleman. And I am no liar. But as a gentleman I will say nothing about Miss Araminta’s conduct, you have my word.”

Charlotte felt uncomfortable at having leveled such accusations at him for she was more than inclined to believe that Araminta was capable of luring a handsome gentleman into an assignation and then becoming indignant when he rejected her.

“All right, I’m very sorry I didn’t give you the benefit of the doubt,” she said with a sigh. “My role requires me to be rather one-eyed, I suppose. The truth is that I had never set eyes on Araminta until the moment I saw her…” she lowered her voice, “slap you.”

“Yes, she’s quite a fiery piece, isn’t she?” His eyes lit up as he said this, but when he saw Charlotte’s expression he added hastily, “And if I were in the market for leg-shackling myself to a beautiful, feisty debutante who’d make it her mission to bend me to her will ’til the end of time, I might be more charitable about her. But that’s not what I want, and the truth is, I can’t get out of London soon enough.”

“Then what keeps you?”

“My father has charged me with the task of ensuring my nephew doesn’t get himself into trouble over a certain unsuitable miss with whom young Archie is besotted. I am here, you see, in the role of dutiful son and uncle. Does that redeem me in your eyes?”

Charlotte, smiled, despite herself. When the angst and self-interest fell away from him, he had a very charming smile, and an almost self-deprecating manner that was quite at odds with the persona he presented on first impression.

She shrugged. “I don’t think it would matter terribly much whether you were redeemed in my eyes. I am, after all, merely the chaperone.”

He gave a surprised laugh at this. “Yes, of course! As a pink of the ton, I am concerned only with making an impression on this year’s crop of debutantes. What interest would I have in the good opinion of a respectably married lady?”

“A respectable widow,” she corrected, “who wields some influence on opinion, I would like to think. So beware, Mr. Durham. If you have set your sights on some worthy damsel, you would indeed wish to court my good opinion. I shall attend a musical soiree tomorrow night with all the venerable dowagers and marriage brokers in town. Don’t risk being tarnished in my eyes.” She glanced meaningfully at her stained bosom. “The music is winding down and I am still in no fit state to make a reappearance in the ballroom thanks to the injury you have wrought upon my dress.”

Mr. Durham’s tongue flicked over his top lip at the same time as he sent her bosom a second, interested glance before he said with a flash of a smile, “Wait but one moment, Mrs. Wendover, I am a man given to wondrous solutions when in a fix. I shall be back in a moment. In fact, before this cotillion is at an end.”

You can pre-order at all retailers for only 99c here.