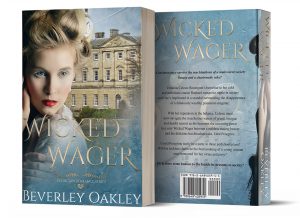 Here is the third extract from Wicked Wager in which my heroine, Celeste, discovers the true identity of the man she kissed unexpectedly at Vauxhall Gardens.

Lady Cowdril, who was easily exerted, never went beyond the second tier of rose bushes, she declared, due to her palpitating heart. However, the opening lines of her sentence, suggesting a return to the house, was truncated by a start of clear delight and rapid volte face.

‘Perry will give me his arm,’ she declared in robust tones, and they all turned to observe a figure issue from the front portico and down the steps, advancing towards them.

Perry? Celeste raised her eyebrows in a silent question regarding the identity of their new visitor, but as he was nearly upon them she followed the cue of the rest of her party: curtseying as she inclined her head in greeting of the arrival whose tall frame was coming into focus. Though to be sure, no one’s heart could be pounding as fiercely as hers, even Lady Cowdril’s in the midst of one of her palpitations.

She ventured a glance from beneath lowered lashes. He was impressive, even from a distance. Unusually, he wore his dark hair naturally, tied in a queue at the back, with informal country attire: knee breeches and knee boots with a dark wool coat. Yes, even from a distance she saw his eyes were very piercing.

Swallowing with difficulty, she was alarmed to observe, as he approached, that they were focused on her. Could it be that this gentleman, whose features were gaining greater distinction with every step, did indeed know her for her role in his sister’s distress?

She frowned as she noticed his full lips were curved in a smile; a smile that seemed only for her; and her heart did a skittering dance at the clear interest of this inimitable Viscount Peregrine as he rounded the rose bushes and finally came to stand in full view before them.

Dear Lord. Cognisance was like a stone dropping to the pit of her stomach. Those lips had covered hers not two nights before in a secluded arbour at Vauxhall Gardens. Those arms had held her against him in a lust-filled moment of abandonment. Sweet Mercy, but Perry—whoever he really was to Lady Cowdril—was Celeste’s handsome stranger.

She stood aside in rigid panic as the formalities were conducted. It only grew worse. This was Viscount Peregrine? Her heart rate ratcheted up several more notches. What would he say? How would he respond? Would he reveal her for the bold strumpet he no doubt thought her? Would she still be able to hold her head high by the end of the house party?

When, by some strange rearrangement of pairings, she found herself walking by his side, having no choice but to rest her hand on the forearm he offered her, she had completely lost the power of speech.

Lady Cowdril had managed one more turn around the rose bushes before seating herself with Celeste’s Aunt Branwell. However, the viscount, or Perry as everyone called him, had evinced a strong desire to admire the roses, calling upon Celeste’s recently lauded expertise.

The kindling look he sent her as they paused by the blooming bushes brought a surely far more vibrant bloom to her cheeks.

Lowering his head, as if to elicit some opinion on a deep red, velvet rose, he murmured, ‘Ah, the Apothecary’s Rose.’ He raised an eyebrow. ‘Now I have you all to myself.’

She wasn’t sure what to make of his words. Should she start with an abject apology for her behavior? A declaration she was not in the habit of consorting with strange men? Neither seemed appropriate when his eyes were twinkling with suppressed humour. Bending to smell the rose, she managed, ‘I prefer to call it by its less pedestrian name, the Red Rose of Lancaster.’ Self-consciously, she brushed an escaped strand of hair from her cheek. Then, summoning up all her courage, she whispered as she cast him an appealing look, ‘Should I be afraid?’

The look he levelled upon her was one of singular calculation. He chuckled. ‘Woe betide The House of Lancaster, for they did not prevail, did they? Hmm, Miss Rosington, your question depends on your assessment of our unexpected little encounter the other night. Was it pleasing, or were you never more relieved than when I melted into the dark? I must say, it really is the most extraordinary coincidence to find you here, when I’d thought never to lay eyes on you again.’ Plucking the rose, he handed it to her with a bow. ‘Perhaps the Rose of Lancaster will one day be an emblem of victory, but for my purposes right now, please accept it as a token of peace.’ He straightened, that wicked, difficult-to-interpret smile tugging at the corners of his mouth. ‘Nevertheless, to return to the subject of our little encounter … As I’d planned to rectify that little matter and ensure I was in a position to lay more than my eyes upon you again, Miss Rosington, perhaps you could say that fate has played into my hands most unexpectedly. You are even more ravishing in the harsh light of day than you were when last we met.’

Celeste shot him a startled look, mixed emotions roiling within her as she found him smiling down at her with both amusement and calculation.

‘You are too kind, my lord,’ she murmured, dropping her eyes as she took the rose, stepping forward to resume their walk. His words were both shocking but curiously exciting. She glanced at the ladies to ensure she was not likely to become the latest subject of their gossip, but they were well occupied with their own gossiping, and half obscured by the rose bushes.

‘A very pretty blush for a maiden who must be accustomed to having praise lavished upon her. So you are a friend of Lady Cowdril? Or your aunt is?’

‘I’ve known Lady Cowdril since I was a child. I did not know who you were, my lord. I don’t know what you must think of my—’

He stayed her rush to lay bare her shame with a finger upon her lips. His lips quirked and his dark eyes seemed to smoulder with everything that swirled between them. Again she felt the sharp rush of sensation spear her belly; the sensation that was familiar to her only in the presence of this gentleman.

‘Your behaviour came from the heart, Miss Rosington, for if you did not know who I was, then I can only be delighted that you found my attentions so pleasing based purely on your honest reaction to me as an ordinary man. You have no idea how delightful that is to a gentleman such as myself, who is constantly fielding off advances.’

His smile, warmer now, more sincere, made Celeste’s heart hammer even harder. So he didn’t condemn her? Nor, it seemed, had he drawn any association between her and his sister.

You can get Wicked Wager on all platforms here: books2read.com/u/49WoqW