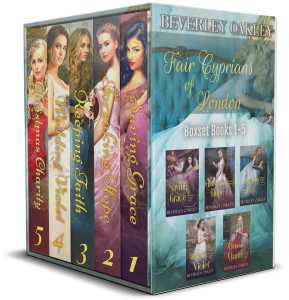 Yesterday was a day of portentous endings for our family. Virgin Australia’s new owner was announced and so was the cessation of its international fleet of Airbuses and Boeing 777s – and I finished The Honourable Fortune Hunter and sent it to my editor.

We can’t do anything about the former but I’ve done my best with the latter. The Honourable Fortune Hunter is a humorous, fast-paced Regency romance about two people who must make the best of a bad situation – but when all is said and done, their love for one another is too strong and compromise is no longer an option.

Immediately after sending Fortune Hunger away for the final line-check, I put together the complete box set for the 5 books in my Fair Cyprians of London series.

Read for free or buy on Amazon

The ruined governess, the ambitious artist’s muse, the betrayed housemaid and the abandoned vicar’s daughter all have one thing in common: the determination to triumph over misfortune and to find love and their heart’s desire.

Grace Fortune trusts no one after she was betrayed by the man she once loved.

Now, she’s the most popular ‘Cyprian’ at Madame Chambon’s high-class London House of Assignation, consort of aristocrats and princes.

As grace prepares for her next job as the special initiation ‘gift’ procured by a mother in fashionable Mayfair for her son’s twenty-first birthday, she plans her revenge.

But revenge delivers the last thing she expected.

Revenge is sweet until it breaks your heart.

Four years ago, Faith’s mysterious benefactress falsely accused her of stealing and deposited her in Madame Chambon’s exclusive brothel.

There, Faith was to learn how to entrance London’s noble gentlemen with her learning in philosophy, politics and art.

Her body was to be saved for the greatest enticement of all: revenge.

Faith doesn’t care what she has to do. She lives only to fulfil a bargain that will set her free.

But when Faith is recruited as the muse of a talented, sensitive painter whose victory in a prestigious art competition turns them both into celebrities overnight, she discovers the reasons behind her mission are very different from what she’d been led to believe.

Now she is complicit in something dark and dangerous while riches, adulation and freedom are hers for the taking.

But what value are these if her heart has become a slave to the man she is required to destroy?

Abandoned at the altar, Max, Lord Belvedere believes he’s evaded family obligation in favour of a life of adventuring in Africa. But his ailing Aunt Euphemia has other ideas.

When Max finds himself in the delightfully diverting arms of Violet Lilywhite while visiting London’s most prestigious House of Assignation, he happens upon the perfect plan. A sham wedding to a ‘penniless shop girl’ should fulfil Aunt Euphemia’s romantic dreams without losing him his newfound liberty.

Violet agrees to the deception with no hesitation. Lord Belvedere is certainly the most charming and surprising of all her male consorts but she has no illusions about a shared future. She wants only to escape the clutches of infamous Madame Chambon.

The plan appears perfect until Max and Violet find themselves falling in love.

Can Max give up his plans for freedom in an exciting new land? Or is freedom to be found in the arms of the woman he loves?

Reluctant courtesan, Charity, has found true love with Hugo, her first and only client.

But when poet and artist, Hugo, is tricked into gambling away his impending inheritance, Charity finds herself at the mercy of Madam Chambon and her infamous house of ill-repute.

Can the two young lovers thwart the conspiracy between Hugo’s social-climbing father, and slippery cousin Cyril, so Hugo can make Charity his Christmas bride?

Filled with mystery and intrigue, these passionate Victorian romances with a twist will have you on the edge of your chair until the very last page.

Get this steamy 5-book series now!