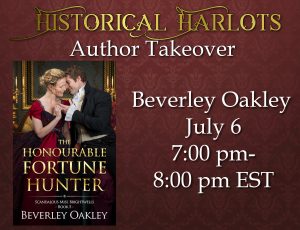 I’d love you to visit Historical Harlots on July 6 for some fun and games … and prizes to win. Yes, it’ll be party-time for the release of The Honourable Fortune Hunter!

In the meantime, here’s an excerpt from when my lovely Lizzy is rescued from a carriage accident that plunged her into the river, by my honourable hero, Theo, who now doesn’t know what to do with her. In this scene, they’re in a donkey cart and Theo has just learned there are no rooms available at the local inn. Now he’s trying to find out where else he can deposit her.

EXCERPT FROM THE HONOURABLE FORTUNE HUNTER

Lizzy sighed. “I wish I’d not told you my real name. At the third Ladies Seminary I was sent to, I started to call myself Miss Marzipan, that being something that I’m quite partial to, but was never allowed because Mrs Hodge refused me anything beyond porridge. I could only imagine what most sweetmeats tasted like since Mrs Hodge, who looks after me, refused me every pleasure in life.”

“Indeed?” Theo said, unmoved. “And did she lock you up in the attic, tied to a chair, and feed you only bread and water every three days, too?”
“Near enough. But Mabel risked her life to smuggle in the victuals necessary to sustain mine, didn’t you, Mabel?” Miss Scott turned her head to address Mabel cheerfully.

“Now, miss, I didn’t quite risk me life, but—” the maid began doubtfully, earning a grumble from her mistress as the girl turned back to Theo.
“Mabel has loyalty and good sense in abundance, but she has no sense of occasion.”

“But a proper sense of occasion is rather necessary, given the seriousness of this one, don’t you think?” Theo enquired. While he found her chatter momentarily diverting, his concerns over the next few hours prevented him from entering into conversation that was a little more lighthearted. “We need to get you somewhere safe and respectable.”

“But you have already decided you can’t do that tonight, surely? It’s too dark to go anywhere,” she pointed out. She clutched the blanket to her and shivered theatrically. “Unless I am warmed in front of a blazing fire very soon, I shall catch my death of cold—and it will be at your door, Mr McAlister.”

She could have no idea of the chill her supposedly lighthearted words sent through him. Theo stared woodenly ahead and tried to ignore the cacophony of images—newsprint pages and parodies involving him and a young woman, now dead—that had all but destroyed his life.
“What would Mrs Hodge say?” he managed, instead. Lame words but the only safe, innocuous words he could manage.

“She won’t know, and we don’t need to tell her. She’s a bitter, sour old puss, and I’m the opposite of her; as sweet as marzipan. Surely I’d be a nice addition to your evening?” She stretched her arms, adding, “You can send me on my way tomorrow. But for now, I shan’t be any bother, I promise.” The way her mouth turned up did nothing to improve his humour.

The book is available at a discount right now: mybook.to/FortuneHunter